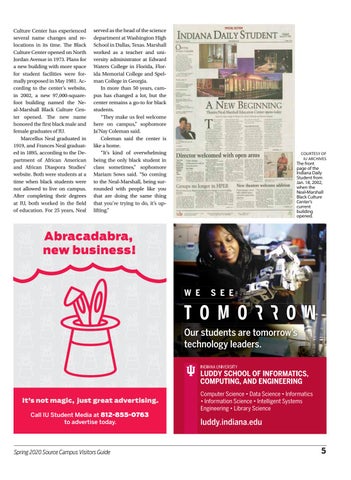 Culture Center has experienced several name changes and relocations in its time. The Black Culture Center opened on North Jordan Avenue in 1973. Plans for a new building with more space for student facilities were formally proposed in May 1981. According to the center’s website, in 2002, a new 97,000-squarefoot building named the Neal-Marshall Black Culture Center opened. The new name honored the first black male and female graduates of IU. Marcellus Neal graduated in 1919, and Frances Neal graduated in 1895, according to the Department of African American and African Diaspora Studies’ website. Both were students at a time when black students were not allowed to live on campus. After completing their degrees at IU, both worked in the field of education. For 25 years, Neal

served as the head of the science department at Washington High School in Dallas, Texas. Marshall worked as a teacher and university administrator at Edward Waters College in Florida, Florida Memorial College and Spelman College in Georgia. In more than 50 years, campus has changed a lot, but the center remains a go-to for black students. “They make us feel welcome here on campus,” sophomore Ja’Nay Coleman said. Coleman said the center is like a home. “It’s kind of overwhelming being the only black student in class sometimes,” sophomore Mariam Sows said. “So coming to the Neal-Marshall, being surrounded with people like you that are doing the same thing that you’re trying to do, it’s uplifting.”

The front page of the Indiana Daily Student from Jan. 18, 2002, when the Neal-Marshall Black Culture Center’s current building opened.