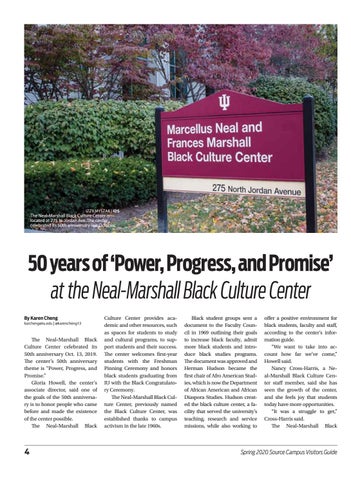 50 years of ‘Power, Progress, and Promise’

Black student groups sent a document to the Faculty Council in 1969 outlining their goals to increase black faculty, admit more black students and introduce black studies programs. The document was approved and Herman Hudson became the first chair of Afro American Studies, which is now the Department of African American and African Diaspora Studies. Hudson created the black culture center, a facility that served the university’s teaching, research and service missions, while also working to

offer a positive environment for black students, faculty and staff, according to the center’s information guide. “We want to take into account how far we’ve come,” Howell said. Nancy Cross-Harris, a Neal-Marshall Black Culture Center staff member, said she has seen the growth of the center, and she feels joy that students today have more opportunities. “It was a struggle to get,” Cross-Harris said. The Neal-Marshall Black