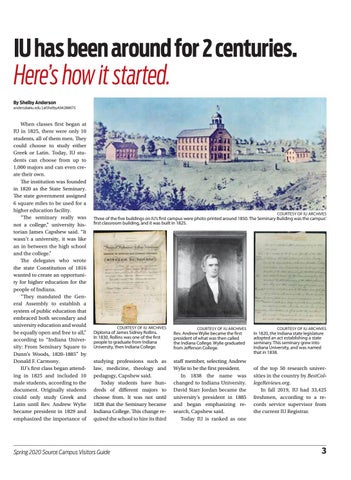 IU has been around for 2 centuries.

When classes first began at IU in 1825, there were only 10 students, all of them men. They could choose to study either Greek or Latin. Today, IU students can choose from up to 1,000 majors and can even create their own. The institution was founded in 1820 as the State Seminary. The state government assigned 6 square miles to be used for a higher education facility.  “The seminary really was not a college,” university historian James Capshew said. “It wasn’t a university, it was like an in between the high school and the college.” The delegates who wrote the state Constitution of 1816 wanted to create an opportunity for higher education for the people of Indiana.  “They mandated the General Assembly to establish a system of public education that embraced both secondary and university education and would be equally open and free to all,” according to “Indiana University: From Seminary Square to Dunn’s Woods, 1820-1885” by Donald F. Carmony. IU’s first class began attending in 1825 and included 10 male students, according to the document. Originally students could only study Greek and Latin until Rev. Andrew Wylie became president in 1829 and emphasized the importance of

Three of the five buildings on IU’s first campus were photo printed around 1850. The Seminary Building was the campus’ first classroom building, and it was built in 1825.

Diploma of James Sidney Rollins. In 1830, Rollins was one of the first people to graduate from Indiana University, then Indiana College.

Rev. Andrew Wylie became the first president of what was then called the Indiana College. Wylie graduated from Jefferson College.

In 1820, the Indiana state legislature adopted an act establishing a state seminary. This seminary grew into Indiana University, and was named that in 1838.

studying professions such as law, medicine, theology and pedagogy, Capshew said. Today students have hundreds of different majors to choose from. It was not until 1828 that the Seminary became Indiana College. This change required the school to hire its third

staff member, selecting Andrew Wylie to be the first president. In 1838 the name was changed to Indiana University. David Starr Jordan became the university’s president in 1885 and began emphasizing research, Capshew said. Today IU is ranked as one

of the top 50 research universities in the country by BestCollegeReviews.org. In fall 2019, IU had 33,425 freshmen, according to a records service supervisor from the current IU Registrar.