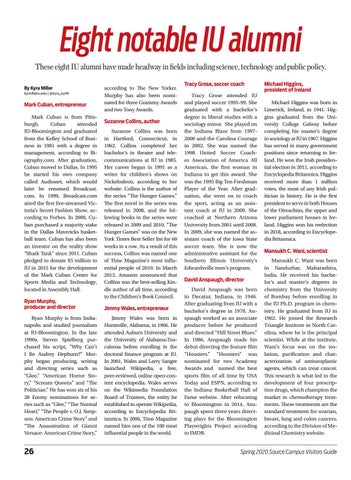 Mark Cuban, entrepreneur Mark Cuban is from Pittsburgh. Cuban attended IU-Bloomington and graduated from the Kelley School of Business in 1981 with a degree in management, according to Biography.com. After graduation, Cuban moved to Dallas. In 1995 he started his own company called Audionet, which would later be renamed Broadcast. com. In 1999, Broadcast.com aired the first live-streamed Victoria’s Secret Fashion Show, according to Forbes. In 2000, Cuban purchased a majority stake in the Dallas Mavericks basketball team. Cuban has also been an investor on the reality show “Shark Tank” since 2011. Cuban pledged to donate $5 million to IU in 2015 for the development of the Mark Cuban Center for Sports Media and Technology, located in Assembly Hall.

according to The New Yorker. Murphy has also been nominated for three Grammy Awards and two Tony Awards. Suzanne Collins, author Suzanne Collins was born in Hartford, Connecticut, in 1962. Collins completed her bachelor’s in theater and telecommunications at IU in 1985. Her career began in 1991 as a writer for children’s shows on Nickelodeon, according to her website. Collins is the author of the series “The Hunger Games.” The first novel in the series was released in 2008, and the following books in the series were released in 2009 and 2010. “The Hunger Games” was on the New York Times Best Seller list for 60 weeks in a row. As a result of this success, Collins was named one of Time Magazine’s most influential people of 2010. In March 2012, Amazon announced that Collins was the best-selling Kindle author of all time, according to the Children’s Book Council.

Ryan Murphy is from Indianapolis and studied journalism at IU-Bloomington. In the late 1990s, Steven Spielberg purchased his script, “Why Can’t I Be Audrey Hepburn?” Murphy began producing, writing and directing series such as “Glee,” “American Horror Story,” “Scream Queens” and “The Politician.” He has won six of his 28 Emmy nominations for series such as “Glee,” “The Normal Heart,” “The People v. O.J. Simpson: American Crime Story” and “The Assassination of Gianni Versace: American Crime Story,”

Jimmy Wales was born in Huntsville, Alabama, in 1966. He attended Auburn University and the University of Alabama-Tuscaloosa before enrolling in the doctoral finance program at IU. In 2001, Wales and Larry Sanger launched Wikipedia, a free, peer-reviewed, online open-content encyclopedia. Wales serves on the Wikimedia Foundation Board of Trustees, the entity he established to operate Wikipedia, according to Encyclopedia Britannica. In 2006, Time Magazine named him one of the 100 most influential people in the world.

Tracy Grose, soccer coach Tracy Grose attended IU and played soccer 1995-99. She graduated with a bachelor’s degree in liberal studies with a sociology minor. She played on the Indiana Blaze from 19972000 and the Carolina Courage in 2002. She was named the 1998 United Soccer Coaches Association of America All American, the first woman in Indiana to get this award. She was the 1995 Big Ten Freshman Player of the Year. After graduation, she went on to coach the sport, acting as an assistant coach at IU in 2000. She coached at Northern Arizona University from 2001 until 2008. In 2009, she was named the assistant coach of the Iowa State soccer team. She is now the administrative assistant for the Southern Illinois University’s Edwardsville men’s program. David Anspaugh, director David Anspaugh was born in Decatur, Indiana, in 1946. After graduating from IU with a bachelor’s degree in 1970, Anspaugh worked as an associate producer before he produced and directed “Hill Street Blues.” In 1986, Anspaugh made his debut directing the feature film “Hoosiers.” “Hoosiers” was nominated for two Academy Awards and named the best sports film of all time by USA Today and ESPN, according to the Indiana Basketball Hall of Fame website. After relocating to Bloomington in 2014, Anspaugh spent three years directing plays for the Bloomington Playwrights Project according to IMDB.

Michael Higgins, president of Ireland Michael Higgins was born in Limerick, Ireland, in 1941. Higgins graduated from the University College Galway before completing his master’s degree in sociology at IU in 1967. Higgins has served in many government positions since returning to Ireland. He won the Irish presidential election in 2011, according to Encyclopedia Britannica. Higgins received more than 1 million votes, the most of any Irish politician in history. He is the first president to serve in both Houses of the Oireachtas, the upper and lower parliament houses in Ireland. Higgins won his reelection in 2018, according to Encyclopedia Britannica. Mansukh C. Wani, scientist Mansukh C. Wani was born in Nandurbar, Maharashtra, India. He received his bachelor’s and master’s degrees in chemistry from the University of Bombay before enrolling in the IU Ph.D. program in chemistry. He graduated from IU in 1962. He joined the Research Triangle Institute in North Carolina, where he is the principal scientist. While at the institute, Wani’s focus was on the isolation, purification and characterization of antineoplastic agents, which can treat cancer. This research is what led to the development of four prescription drugs, which champion the market in chemotherapy treatments. These treatments are the standard treatment for ovarian, breast, lung and colon cancers, according to the Division of Medicinal Chemistry website.