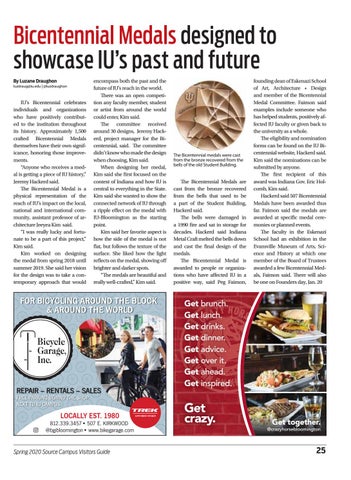 IU’s Bicentennial celebrates individuals and organizations who have positively contributed to the institution throughout its history. Approximately 1,500 crafted Bicentennial Medals themselves have their own significance, honoring those improvements. “Anyone who receives a medal is getting a piece of IU history,” Jeremy Hackerd said.  The Bicentennial Medal is a physical representation of the reach of IU’s impact on the local, national and international community, assistant professor of architecture Jeeyea Kim said. “I was really lucky and fortunate to be a part of this project,” Kim said. Kim worked on designing the medal from spring 2018 until summer 2019. She said her vision for the design was to take a contemporary approach that would

encompass both the past and the future of IU’s reach in the world. There was an open competition any faculty member, student or artist from around the world could enter, Kim said.  The committee received around 30 designs, Jeremy Hackerd, project manager for the Bicentennial, said. The committee didn’t know who made the design when choosing, Kim said. When designing her medal, Kim said she first focused on the context of Indiana and how IU is central to everything in the State. Kim said she wanted to show the connected network of IU through a ripple effect on the medal with IU-Bloomington as the starting point. Kim said her favorite aspect is how the side of the medal is not flat, but follows the texture of the surface. She liked how the light reflects on the medal, showing off brighter and darker spots. “The medals are beautiful and really well-crafted,” Kim said.

The Bicentennial medals were cast from the bronze recovered from the bells of the old Student Building.

The Bicentennial Medals are cast from the bronze recovered from the bells that used to be a part of the Student Building, Hackerd said. The bells were damaged in a 1990 fire and sat in storage for decades. Hackerd said Indiana Metal Craft melted the bells down and cast the final design of the medals. The Bicentennial Medal is awarded to people or organizations who have affected IU in a positive way, said Peg Faimon,

founding dean of Eskenazi School of Art, Architecture + Design and member of the Bicentennial Medal Committee. Faimon said examples include someone who has helped students, positively affected IU faculty or given back to the university as a whole. The eligibility and nomination forms can be found on the IU Bicentennial website, Hackerd said. Kim said the nominations can be submitted by anyone. The first recipient of this award was Indiana Gov. Eric Holcomb, Kim said. Hackerd said 507 Bicentennial Medals have been awarded thus far. Faimon said the medals are awarded at specific medal ceremonies or planned events. The faculty in the Eskenazi School had an exhibition in the Evansville Museum of Arts, Science and History at which one member of the Board of Trustees awarded a few Bicentennial Medals, Faimon said. There will also be one on Founders day, Jan. 20

Get brunch. Get lunch. Get drinks. Get dinner. Get advice. Get over it. Get ahead. Get inspired.