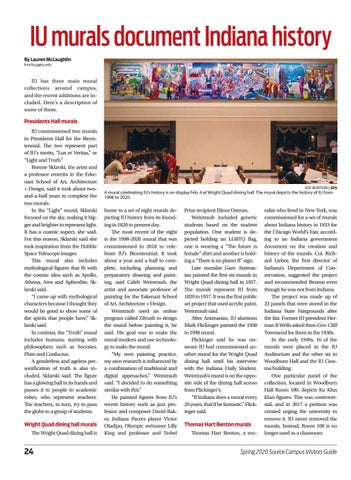 IU has three main mural collections around campus, and the recent additions are included. Here’s a description of some of them. Presidents Hall murals IU commissioned two murals in Presidents Hall for the Bicentennial. The two represent part of IU’s motto, “Lux et Veritas,” or “Light and Truth.”   Bonnie Sklarski, the artist and a professor emerita in the Eskenazi School of Art, Architecture + Design, said it took about twoand-a-half years to complete the two murals.  In the “Light” mural, Sklarski focused on the sky, making it bigger and brighter to represent light. It has a cosmic aspect, she said. For this reason, Sklarski said she took inspiration from the Hubble Space Telescope images. This mural also includes mythological figures that fit with the cosmic idea such as Apollo, Athena, Ares and Aphrodite, Sklarski said.  “I came up with mythological characters because I thought they would be good to show some of the spirits that people have,” Sklarski said. In contrast, the “Truth” mural includes humans, starting with philosophers such as Socrates, Plato and Confucius. A genderless and ageless personification of truth is also included, Sklarski said. The figure has a glowing ball in its hands and passes it to people in academic robes, who represent teachers. The teachers, in turn, try to pass the globe to a group of students. Wright Quad dining hall murals The Wright Quad dining hall is

A mural celebrating IU’s history is on display Feb. 4 at Wright Quad dining hall. The mural depicts the history of IU from 1998 to 2020.

home to a set of eight murals depicting IU history from its founding in 1820 to present day. The most recent of the eight is the 1998-2020 mural that was commissioned in 2018 to celebrate IU’s Bicentennial. It took about a year and a half to complete, including planning and preparatory drawing and painting, said Caleb Weintraub, the artist and associate professor of painting for the Eskenazi School of Art, Architecture + Design. Weintraub used an online program called ZBrush to design the mural before painting it, he said. His goal was to make the mural modern and use technology to make the mural. “My own painting practice, my own research is influenced by a combination of traditional and digital approaches,” Weintraub said. “I decided to do something similar with this.” He painted figures from IU’s recent history such as jazz professor and composer David Baker, Indiana Pacers player Victor Oladipo, Olympic swimmer Lilly King and professor and Nobel

Prize recipient Elinor Ostrom. Weintraub included generic students based on the student population. One student is depicted holding an LGBTQ flag, one is wearing a “The future is female” shirt and another is holding a “There is no planet B” sign. Late muralist Garo Antreasian painted the first six murals in Wright Quad dining hall in 1957. The murals represent IU from 1820 to 1957. It was the first public art project that used acrylic paint, Weintraub said. After Antreasian, IU alumnus Mark Flickinger painted the 1958 to 1998 mural. Flickinger said he was unaware IU had commissioned another mural for the Wright Quad dining hall until his interview with the Indiana Daily Student. Weintraub’s mural is on the opposite side of the dining hall across from Flickinger’s. “If Indiana does a mural every 20 years, that’d be fantastic,” Flickinger said. Thomas Hart Benton murals Thomas Hart Benton, a mu-

ralist who lived in New York, was commissioned for a set of murals about Indiana history in 1933 for the Chicago World’s Fair, according to an Indiana government document on the creation and history of the murals. Col. Richard Lieber, the first director of Indiana’s Department of Conservation, suggested the project and recommended Benton even though he was not from Indiana. The project was made up of 22 panels that were stored in the Indiana State Fairgrounds after the fair. Former IU president Herman B Wells asked then-Gov. Cliff Townsend for them in the 1930s. In the early 1940s, 16 of the murals were placed in the IU Auditorium and the other six in Woodburn Hall and the IU Cinema building. One particular panel of the collection, located in Woodburn Hall Room 100, depicts Ku Klux Klan figures. This was controversial, and in 2017 a petition was created urging the university to remove it. IU never removed the murals. Instead, Room 100 is no longer used as a classroom.