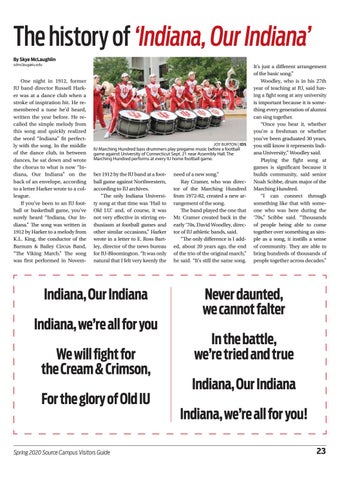 The history of ‘Indiana, Our Indiana’ By Skye McLaughlin sdmclaug@iu.edu

One night in 1912, former IU band director Russell Harker was at a dance club when a stroke of inspiration hit. He remembered a tune he’d heard, written the year before. He recalled the simple melody from this song and quickly realized the word “Indiana” fit perfectly with the song. In the middle of the dance club, in between dances, he sat down and wrote the chorus to what is now “Indiana, Our Indiana” on the back of an envelope, according to a letter Harker wrote to a colleague. If you’ve been to an IU football or basketball game, you’ve surely heard “Indiana, Our Indiana.” The song was written in 1912 by Harker to a melody from K.L. King, the conductor of the Barnum & Bailey Circus Band, “The Viking March.” The song was first performed in Novem-

ber 1912 by the IU band at a football game against Northwestern, according to IU archives. “The only Indiana University song at that time was ‘Hail to Old I.U.’ and, of course, it was not very effective in stirring enthusiasm at football games and other similar occasions,” Harker wrote in a letter to E. Ross Bartley, director of the news bureau for IU-Bloomington. “It was only natural that I felt very keenly the

need of a new song.” Ray Cramer, who was director of the Marching Hundred from 1972-82, created a new arrangement of the song. The band played the one that Mr. Cramer created back in the early ‘70s, David Woodley, director of IU athletic bands, said. “The only difference is I added, about 20 years ago, the end of the trio of the original march,” he said. “It’s still the same song.

It’s just a different arrangement of the basic song.” Woodley, who is in his 27th year of teaching at IU, said having a fight song at any university is important because it is something every generation of alumni can sing together. “Once you hear it, whether you’re a freshman or whether you’ve been graduated 30 years, you still know it represents Indiana University,” Woodley said. Playing the fight song at games is significant because it builds community, said senior Noah Scibbe, drum major of the Marching Hundred. “I can connect through something like that with someone who was here during the ‘70s,” Scibbe said. “Thousands of people being able to come together over something as simple as a song, it instills a sense of community. They are able to bring hundreds of thousands of people together across decades.”

Indiana, we’re all for you We will ﬁght for the Cream & Crimson,

In the battle, we’re tried and true Indiana, Our Indiana

For the glory of Old IU Indiana, we’re all for you! Spring 2020 Source Campus Visitors Guide