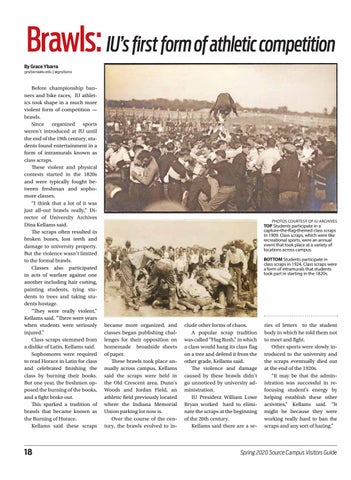 Before championship banners and bike races, IU athletics took shape in a much more violent form of competition — brawls. Since organized sports weren’t introduced at IU until the end of the 19th century, students found entertainment in a form of intramurals known as class scraps. These violent and physical contests started in the 1820s and were typically fought between freshman and sophomore classes. “I think that a lot of it was just all-out brawls really,” Director of University Archives Dina Kellams said. The scraps often resulted in broken bones, lost teeth and damage to university property. But the violence wasn’t limited to the formal brawls. Classes also participated in acts of warfare against one another including hair cutting, painting students, tying students to trees and taking students hostage. “They were really violent,” Kellams said. “There were years when students were seriously injured.” Class scraps stemmed from a dislike of Latin, Kellams said. Sophomores were required to read Horace in Latin for class and celebrated finishing the class by burning their books. But one year, the freshmen opposed the burning of the books, and a fight broke out. This sparked a tradition of brawls that became known as the Burning of Horace. Kellams said these scraps

became more organized, and classes began publishing challenges for their opposition on homemade broadside sheets of paper. These brawls took place annually across campus. Kellams said the scraps were held in the Old Crescent area, Dunn’s Woods and Jordan Field, an athletic field previously located where the Indiana Memorial Union parking lot now is. Over the course of the century, the brawls evolved to in-

clude other forms of chaos. A popular scrap tradition was called “Flag Rush,” in which a class would hang its class flag on a tree and defend it from the other grade, Kellams said. The violence and damage caused by these brawls didn’t go unnoticed by university administration. IU President William Lowe Bryan worked hard to eliminate the scraps at the beginning of the 20th century. Kellams said there are a se-

ries of letters to the student body in which he told them not to meet and fight. Other sports were slowly introduced to the university and the scraps eventually died out at the end of the 1920s. “It may be that the administration was successful in refocusing student’s energy by helping establish these other activities,” Kellams said. “It might be because they were working really hard to ban the scraps and any sort of hazing.”