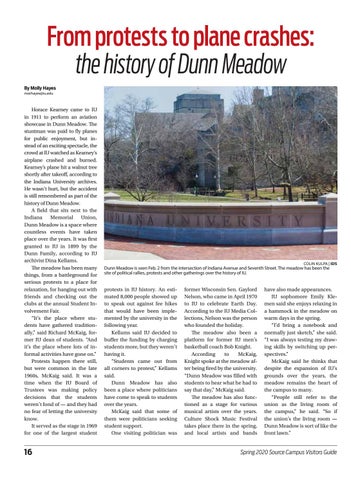 From protests to plane crashes: the history of Dunn Meadow By Molly Hayes morhayes@iu.edu

Horace Kearney came to IU in 1911 to perform an aviation showcase in Dunn Meadow. The stuntman was paid to fly planes for public enjoyment, but instead of an exciting spectacle, the crowd at IU watched as Kearney’s airplane crashed and burned. Kearney’s plane hit a walnut tree shortly after takeoff, according to the Indiana University archives. He wasn’t hurt, but the accident is still remembered as part of the history of Dunn Meadow. A field that sits next to the Indiana Memorial Union, Dunn Meadow is a space where countless events have taken place over the years. It was first granted to IU in 1899 by the Dunn Family, according to IU archivist Dina Kellams. The meadow has been many things, from a battleground for serious protests to a place for relaxation, for hanging out with friends and checking out the clubs at the annual Student Involvement Fair.  “It’s the place where students have gathered traditionally,” said Richard McKaig, former IU dean of students. “And it’s the place where lots of informal activities have gone on.”  Protests happen there still, but were common in the late 1960s, McKaig said. It was a time when the IU Board of Trustees was making policy decisions that the students weren’t fond of — and they had no fear of letting the university know.  It served as the stage in 1969 for one of the largest student

Dunn Meadow is seen Feb. 2 from the intersection of Indiana Avenue and Seventh Street. The meadow has been the site of political rallies, protests and other gatherings over the history of IU.

protests in IU history. An estimated 8,000 people showed up to speak out against fee hikes that would have been implemented by the university in the following year. Kellams said IU decided to buffer the funding by charging students more, but they weren’t having it.  “Students came out from all corners to protest,” Kellams said.  Dunn Meadow has also been a place where politicians have come to speak to students over the years.  McKaig said that some of them were politicians seeking student support.   One visiting politician was

former Wisconsin Sen. Gaylord Nelson, who came in April 1970 to IU to celebrate Earth Day. According to the IU Media Collections, Nelson was the person who founded the holiday. The meadow also been a platform for former IU men’s basketball coach Bob Knight. According to McKaig, Knight spoke at the meadow after being fired by the university. “Dunn Meadow was filled with students to hear what he had to say that day,” McKaig said. The meadow has also functioned as a stage for various musical artists over the years. Culture Shock Music Festival takes place there in the spring, and local artists and bands

have also made appearances. IU sophomore Emily Klemen said she enjoys relaxing in a hammock in the meadow on warm days in the spring.  “I’d bring a notebook and normally just sketch,” she said. “I was always testing my drawing skills by switching up perspectives.”  McKaig said he thinks that despite the expansion of IU’s grounds over the years, the meadow remains the heart of the campus to many.  “People still refer to the union as the living room of the campus,” he said. “So if the union’s the living room — Dunn Meadow is sort of like the front lawn.”