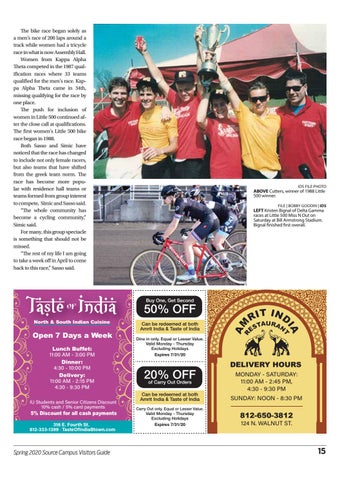 The bike race began solely as a menâ&#x20AC;&#x2122;s race of 200 laps around a track while women had a tricycle race in what is now Assembly Hall.Â Women from Kappa Alpha Theta competed in the 1987 qualification races where 33 teams qualified for the menâ&#x20AC;&#x2122;s race. Kappa Alpha Theta came in 34th, missing qualifying for the race by one place.Â  The push for inclusion of women in Little 500 continued after the close call at qualifications. The first womenâ&#x20AC;&#x2122;s Little 500 bike race began in 1988.Â  Both Sasso and Simic have noticed that the race has changed to include not only female racers, but also teams that have shifted from the greek team norm. The race has become more popular with residence hall teams or teams formed from group interest to compete, Simic and Sasso said.Â  â&#x20AC;&#x153;The whole community has become a cycling community,â&#x20AC;? Simic said. For many, this group spectacle is something that should not be missed.Â  â&#x20AC;&#x153;The rest of my life I am going to take a week off in April to come back to this race,â&#x20AC;? Sasso said.

Buy One, Get Second

Can be redeemed at both Amrit India & Taste of India Dine in only. Equal or Lesser Value. Valid Monday - Thursday Excluding Holidays Expires 7/31/20

20% OFF of Carry Out Orders

Can be redeemed at both Amrit India & Taste of India

Carry Out only. Equal or Lesser Value.