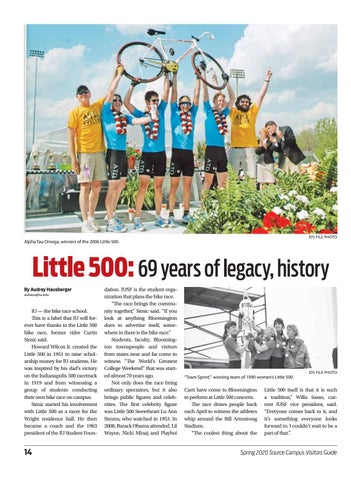 IU — the bike race school. This is a label that IU will forever have thanks to the Little 500 bike race, former rider Curtis Simic said. Howard Wilcox Jr. created the Little 500 in 1951 to raise scholarship money for IU students. He was inspired by his dad’s victory on the Indianapolis 500 racetrack in 1919 and from witnessing a group of students conducting their own bike race on campus.  Simic started his involvement with Little 500 as a racer for the Wright residence hall. He then became a coach and the 1963 president of the IU Student Foun-

dation. IUSF is the student organization that plans the bike race. “The race brings the community together,” Simic said. “If you look at anything Bloomington does to advertise itself, somewhere in there is the bike race.” Students, faculty, Bloomington townspeople and visitors from states near and far come to witness “The World’s Greatest College Weekend” that was started almost 70 years ago. Not only does the race bring ordinary spectators, but it also brings public figures and celebrities. The first celebrity figure was Little 500 Sweetheart Lu Ann Simms, who watched in 1953. In 2008, Barack Obama attended. Lil Wayne, Nicki Minaj and Playboi

Carti have come to Bloomington to perform at Little 500 concerts. The race draws people back each April to witness the athletes whip around the Bill Armstrong Stadium. “The coolest thing about the

Little 500 itself is that it is such a tradition,” Willa Sasso, current IUSF vice president, said. “Everyone comes back to it, and it’s something everyone looks forward to. I couldn’t wait to be a part of that.”