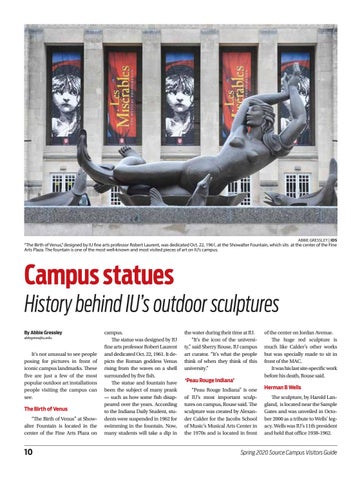 “The Birth of Venus,” designed by IU fine arts professor Robert Laurent, was dedicated Oct. 22, 1961, at the Showalter Fountain, which sits at the center of the Fine Arts Plaza. The fountain is one of the most well-known and most visited pieces of art on IU’s campus.

It’s not unusual to see people posing for pictures in front of iconic campus landmarks. These five are just a few of the most popular outdoor art installations people visiting the campus can see. The Birth of Venus “The Birth of Venus” at Showalter Fountain is located in the center of the Fine Arts Plaza on

campus. The statue was designed by IU fine arts professor Robert Laurent and dedicated Oct. 22, 1961. It depicts the Roman goddess Venus rising from the waves on a shell surrounded by five fish. The statue and fountain have been the subject of many prank — such as how some fish disappeared over the years. According to the Indiana Daily Student, students were suspended in 1962 for swimming in the fountain. Now, many students will take a dip in

the water during their time at IU. “It’s the icon of the university,” said Sherry Rouse, IU campus art curator. “It’s what the people think of when they think of this university.” ‘Peau Rouge Indiana’ “Peau Rouge Indiana” is one of IU’s most important sculptures on campus, Rouse said. The sculpture was created by Alexander Calder for the Jacobs School of Music’s Musical Arts Center in the 1970s and is located in front

of the center on Jordan Avenue. The huge red sculpture is much like Calder’s other works but was specially made to sit in front of the MAC. It was his last site-specific work before his death, Rouse said. Herman B Wells The sculpture, by Harold Langland, is located near the Sample Gates and was unveiled in October 2000 as a tribute to Wells’ legacy. Wells was IU’s 11th president and held that office 1938-1962.