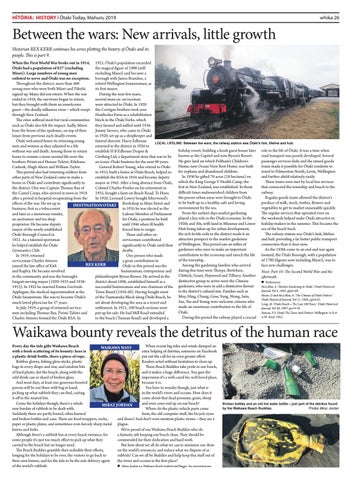 Waikawa bounty reveals the detritus of the human race When recent big tides and winds dumped an Every day the tide gifts Waikawa Beach WAIKAWA WAYS extra helping of detritus, someone on Facebook with a fresh scattering of its bounty: here is put out the call for an even greater effort. a plastic drink bottle, there a piece of rope. Readers acted without hesitation to clean up. Rubber gloves, fishing glow sticks, plastic These Beach Buddies take pride in our beach, bags in every shape and size, and random bits and it makes a huge difference. You gain the of hard plastic dot the beach, along with the impression it&#39;s a well-cared for, well-loved place, odd drink can or shard of broken glass. And most days, at least one generous-hearted because it is. person will be out there with bag in hand, You have to wonder though, just what is picking up what rubbish they can find, carting in the world&#39;s rivers and oceans. How does it it off to the nearest bin. come about that dead possums, goats, sheep Come the holidays though, there&#39;s a whole and even cows end up on our beach? MIRAZ JORDAN new burden of rubbish to be dealt with. Where do the plastic vehicle parts come Suddenly there are partly buried, often burned from, the old computer stuff, the bicycle tyres and broken bottles and cans. There are food wrappers, socks, and shoes? And don&#39;t even mention plastic straws – they are a paper or plastic plates, and sometimes even fiercely sharp metal plague. knives and forks. We&#39;re proud of our Waikawa Beach Buddies who do Although there&#39;s a rubbish bin at every beach entrance, for a fantastic job keeping our beach clean. They should be commended for their dedication and hard work. some people it&#39;s just too much effort to pick up what they But how about we all do what we can to minimise our draw carried to the beach but no longer need. on the world&#39;s resources, and reduce what we dispose of as The Beach Buddies grumble then redouble their efforts, rubbish? Can we all be Buddies and help keep this stuff out of longing for the holidays to be over, the visitors to go back to the rivers and oceans in the first place? their own homes, and for the tide to be the sole delivery agent of the world&#39;s rubbish. n  Miraz Jordan is a Waikawa Beach resident and blogger. See www.miraz.me:

A year after publishing the first Ōtaki Today, we've got 32 pages of local news and views in the September 2019 edition.