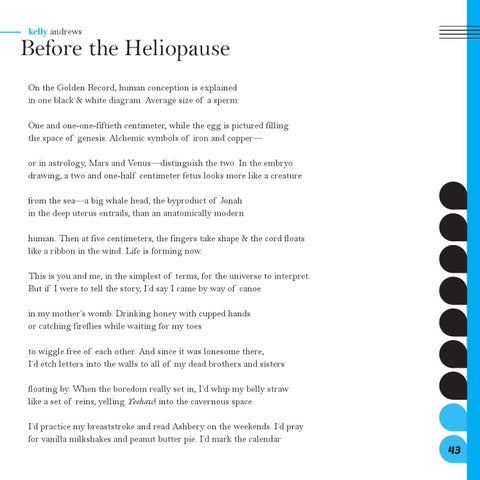 Before Beforethe theHeliopause Heliopause On the Golden Record, human conception is explained in one black &amp; white diagram. Average size of a sperm: One and one-one-fiftieth centimeter, while the egg is pictured filling the space of genesis. Alchemic symbols of iron and copper— or in astrology, Mars and Venus—distinguish the two. In the embryo drawing, a two and one-half centimeter fetus looks more like a creature from the sea—a big whale head, the byproduct of Jonah in the deep uterus entrails, than an anatomically modern human. Then at five centimeters, the fingers take shape &amp; the cord floats like a ribbon in the wind. Life is forming now. This is you and me, in the simplest of terms, for the universe to interpret. But if I were to tell the story, I’d say I came by way of canoe in my mother’s womb. Drinking honey with cupped hands or catching fireflies while waiting for my toes to wiggle free of each other. And since it was lonesome there, I’d etch letters into the walls to all of my dead brothers and sisters floating by. When the boredom really set in, I’d whip my belly straw like a set of reins, yelling Yeehaw! into the cavernous space. I’d practice my breaststroke and read Ashbery on the weekends. I’d pray for vanilla milkshakes and peanut butter pie. I’d mark the calendar

Here it is -- the inaugural issue of IDK Magazine. We love electric prose and poems that make the hairs on our arms stand pin-straight. Nothing’s better, in our book, than a sentence that can crack our skull open like an egg or a line that forces us to remember its internal rhyme weeks later. We hope you’ll fiddle with form. We hope you’ll hug your strangeness. Play with dissonance; play with assonance. Interrogate dead leaders. Become notorious. 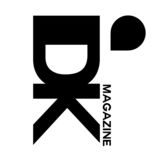