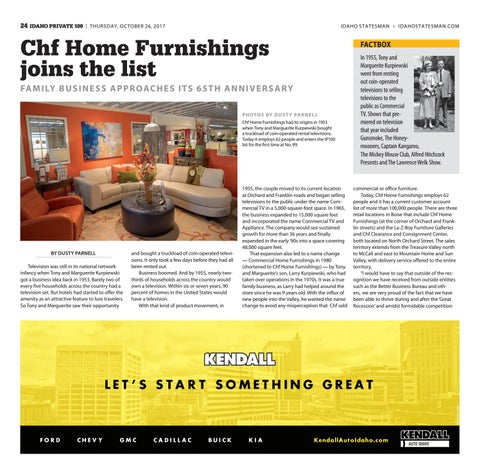 BY DUSTY PARNELL Television was still in its national network infancy when Tony and Marguerite Kurpiewski got a business idea back in 1953. Barely two of every five households across the country had a television set. But hotels had started to offer the amenity as an attractive feature to lure travelers. So Tony and Marguerite saw their opportunity

and bought a truckload of coin-operated televisions. It only took a few days before they had all been rented out. Business boomed. And by 1955, nearly twothirds of households across the country would own a television. Within six or seven years, 90 percent of homes in the United States would have a television. With that kind of product movement, in

1955, the couple moved to its current location at Orchard and Franklin roads and began selling televisions to the public under the name Commercial TV in a 5,000-square-foot space. In 1965, the business expanded to 15,000 square feet and incorporated the name Commercial TV and Appliance. The company would see sustained growth for more than 36 years and finally expanded in the early ‘90s into a space covering 48,000 square feet. That expansion also led to a name change — Commercial Home Furnishings in 1980 (shortened to Chf Home Furnishings) — by Tony and Marguerite’s son, Larry Kurpiewski, who had taken over operations in the 1970s. It was a true family business, as Larry had helped around the store since he was 9 years old. With the influx of new people into the Valley, he wanted the name change to avoid any misperception that Chf sold

In 1955, Tony and Marguerite Kurpiewski went from renting out coin-operated televisions to selling televisions to the public as Commercial TV. Shows that premiered on television that year included Gunsmoke, The Honeymooners, Captain Kangaroo, The Mickey Mouse Club, Alfred Hitchcock Presents and The Lawrence Welk Show.

commercial or office furniture. Today, Chf Home Furnishings employs 62 people and it has a current customer account list of more than 100,000 people. There are three retail locations in Boise that include Chf Home Furnishings (at the corner of Orchard and Franklin streets) and the La-Z-Boy Furniture Galleries and Chf Clearance and Consignment Center, both located on North Orchard Street. The sales territory extends from the Treasure Valley north to McCall and east to Mountain Home and Sun Valley, with delivery service offered to the entire territory. “I would have to say that outside of the recognition we have received from outside entities such as the Better Business Bureau and others, we are very proud of the fact that we have been able to thrive during and after the ‘Great Recession’ and amidst formidable competition 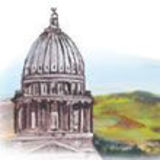