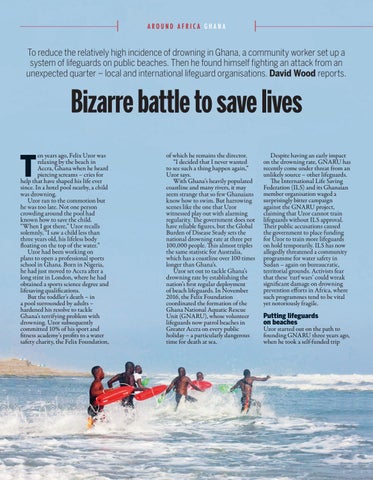 To reduce the relatively high incidence of drowning in Ghana, a community worker set up a system of lifeguards on public beaches. Then he found himself fighting an attack from an unexpected quarter – local and international lifeguard organisations. David Wood reports.

Bizarre battle to save lives T

en years ago, Felix Uzor was relaxing by the beach in Accra, Ghana when he heard piercing screams – cries for help that have shaped his life ever since. In a hotel pool nearby, a child was drowning. Uzor ran to the commotion but he was too late. Not one person crowding around the pool had known how to save the child. “When I got there,” Uzor recalls solemnly, “I saw a child less than three years old, his lifeless body floating on the top of the water.” Uzor had been working on plans to open a professional sports school in Ghana. Born in Nigeria, he had just moved to Accra after a long stint in London, where he had obtained a sports science degree and lifesaving qualifications. But the toddler’s death – in a pool surrounded by adults – hardened his resolve to tackle Ghana’s terrifying problem with drowning. Uzor subsequently committed 10% of his sport and fitness academy’s profits to a water safety charity, the Felix Foundation,

of which he remains the director. “I decided that I never wanted to see such a thing happen again,” Uzor says. With Ghana’s heavily populated coastline and many rivers, it may seem strange that so few Ghanaians know how to swim. But harrowing scenes like the one that Uzor witnessed play out with alarming regularity. The government does not have reliable figures, but the Global Burden of Disease Study sets the national drowning rate at three per 100,000 people. This almost triples the same statistic for Australia, which has a coastline over 100 times longer than Ghana’s. Uzor set out to tackle Ghana’s drowning rate by establishing the nation’s first regular deployment of beach lifeguards. In November 2016, the Felix Foundation coordinated the formation of the Ghana National Aquatic Rescue Unit (GNARU), whose volunteer lifeguards now patrol beaches in Greater Accra on every public holiday – a particularly dangerous time for death at sea.

Despite having an early impact on the drowning rate, GNARU has recently come under threat from an unlikely source – other lifeguards. The International Life Saving Federation (ILS) and its Ghanaian member organisation waged a surprisingly bitter campaign against the GNARU project, claiming that Uzor cannot train lifeguards without ILS approval. Their public accusations caused the government to place funding for Uzor to train more lifeguards on hold temporarily. ILS has now allegedly threatened a community programme for water safety in Sudan – again on bureaucratic, territorial grounds. Activists fear that these ‘turf wars’ could wreak significant damage on drowning prevention efforts in Africa, where such programmes tend to be vital yet notoriously fragile.

Putting lifeguards on beaches Uzor started out on the path to founding GNARU three years ago, when he took a self-funded trip 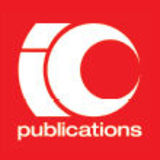 New African’s March 2018 issue analyses what the immediate impact of South Africa’s new President Cyril Ramaphosa has been and how the chang...

New African’s March 2018 issue analyses what the immediate impact of South Africa’s new President Cyril Ramaphosa has been and how the chang...