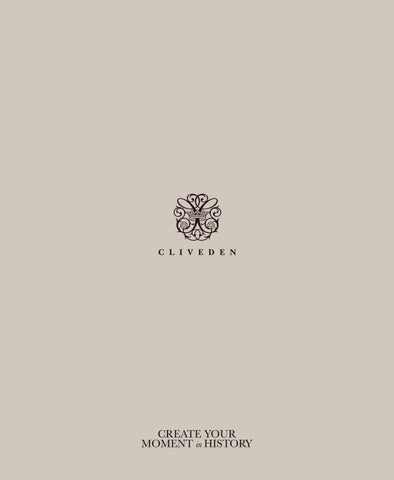 CREATE YOUR MOMENT in HISTORY

350 YEARS of HERITAGE When a house is as beautiful as this itâ&#x20AC;&#x2122;s only right that it has been at the centre of so many moments in history. With distinguished guests from Queen Victoria to Winston Churchill, including owners as characterful as Nancy Astor and from duels to political scandal, Clivedenâ&#x20AC;&#x2122;s history is drenched in glamour, intrigue and drama. Standing proud in the heart of the Berkshire countryside, just 40 minutes from central London, overlooking the River Thames and surrounded by 376 acres of National Trust gardens, Cliveden is as spectacular as it is distinguished.

JOIN the PARTY Cliveden was designed to host and entertain the world’s most distinguished people, which is why it is so at ease with glamour and elegance today.

Whether it’s a pre-dinner cocktail in the bar, a candle-lit dinner in the French Dining Room or a black-tie ball in the Great Hall, we want our guests to enjoy a sense of what and who have gone before. You’ll find that the house is punctuated by all the eccentric quirks and idiosyncrasies you’d expect from the special place where everyone, from heads of state through to the most famous film stars have partied.

A sense of historical significance permeates all of Cliveden but the French Dining Room stands out even within this house. During a visit to Château d’Asnières, William Waldorf Astor realised the dimensions of the dining room matched those of the dining room at Cliveden. He was so taken with the style, he bought the entire room on the spot including panelling and side tables and had them crafted into his very own dining room.

André Garrett joined Cliveden from one of the most celebrated restaurants in Mayfair, bringing his own signature style and flair to the house. His fine cuisine can be sampled in his restaurant, The André Garrett Restaurant which takes centre stage in the main house.

Once used to house Lord Astorâ&#x20AC;&#x2122;s most prized fillies, the stable block has been converted to The Astor Grill. Offering a simple and informal approach to dining at Cliveden, The Astor Grill is full of character and subtly picks up on the equine heritage of the building.

The Belmont, one of Cliveden’s flotilla of vintage launches

BEYOND our HOUSE Like all the best house parties, Cliveden’s entertainment doesn’t stop when you go outside. Cruise on the River Thames, swim in the world-famous outdoor pool where John Profumo first saw Christine Keeler, or spend the afternoon relaxing in the spa. Just 40 minutes from central London and 25 minutes from Heathrow Airport, Cliveden is the perfect country retreat. Find hidden gems in the gardens, explore local towns like Windsor and Henley and be charmed, as much by the enchanting surroundings of the house as by the house itself.

For a totally private stay, discover Spring Cottage. This beautiful three-bedroom home on the banks of the River Thames offers our most private accommodation. Originally built in 1857, the cottage was frequented by Queen Victoria where she would arrive by boat from Windsor Castle to take tea at Cliveden with her great friend, the Duchess of Sutherland, former chĂ˘telaine of the house. Today the cottage hosts groups of families and friends, or those seeking total peace and privacy.

STAY in SPLENDOUR The rooms and suites at Cliveden have each been named after a prominent guest from Clivedenâ&#x20AC;&#x2122;s history and have all been restored to their full glory, with beautiful craftsmanship, stunning interiors and all the comforts and luxury that befits a house like this. Every room has its own character. There is no corporate formality here; no simple one-scheme suits all. Instead careful consideration has gone into every detail with many of the fabrics, carpets and pieces of furniture designed specifically for Cliveden. Vast fireplaces still exist in the main rooms and youâ&#x20AC;&#x2122;ll also find a set of the original service bells.

Below: The Buckingham Suite Left: The Sutherland Suite

As testament to the heritage that has gone before, the Sutherland Suite contains the original bed and dressing table that belonged to the Duchess of Sutherland who lived at Cliveden from 1849 â&#x20AC;&#x201C; 1868.

Right: The Queen Charlotte Suite Below: The Shrewsbury Suite

Cliveden is London’s country retreat, just 40 minutes away from the centre of town and 25 minutes from Heathrow Airport.

1849 1666 Cliveden is built by the Duke of Buckingham to entertain his mistress, The Countess of Shrewsbury

The Duke and Duchess of Sutherland move in to Cliveden. The building suffers a devastating fire which destroys the main house. Queen Victoria sees the smoke from Windsor Castle and despatches fire engines from Windsor to help to fight the fire. Charles Barry is commissioned to rebuild the mansion (the same architect as the Houses of Parliament and Highclere Castle also known as Downton Abbey)

Complete restoration project gets underway on the main house

The Duke of Westminster becomes the new owner of Cliveden

1965 The Beatles film part of ‘Help’ the movie at Cliveden

Waldorf Astor is given Cliveden by his father, William Waldorf Astor. That same year, William gives Waldorf’s wife Nancy a magnificent tiara containing the famous Sancy diamond which is 55 carats and is now kept in the Louvre in Paris

The Mistresses of Cliveden: Three Centuries of Scandal, Power and Intrigue in an English Stately Home is written by Natalie Livingstone

Discover the beauty of Cliveden House and its rich history...

Discover the beauty of Cliveden House and its rich history...