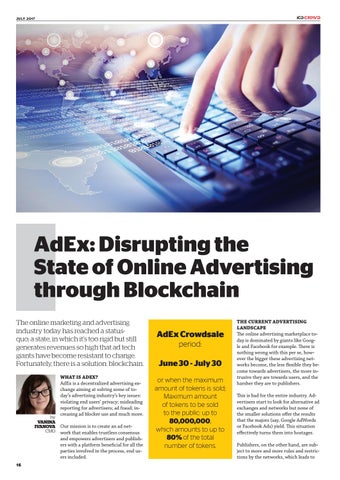 AdEx: Disrupting the State of Online Advertising through Blockchain The online marketing and advertising industry today has reached a statusquo; a state, in which it’s too rigid but still generates revenues so high that ad tech giants have become resistant to change. Fortunately, there is a solution: blockchain.

WHAT IS ADEX? AdEx is a decentralized advertising exchange aiming at solving some of today’s advertising industry’s key issues: violating end users’ privacy; misleading reporting for advertisers; ad fraud; increasing ad blocker use and much more. Our mission is to create an ad network that enables trustless consensus and empowers advertisers and publishers with a platform beneficial for all the parties involved in the process, end users included.

THE CURRENT ADVERTISING LANDSCAPE The online advertising marketplace today is dominated by giants like Google and Facebook for example. There is nothing wrong with this per se, however the bigger these advertising networks become, the less flexible they become towards advertisers, the more intrusive they are towards users, and the harsher they are to publishers. This is bad for the entire industry. Advertisers start to look for alternative ad exchanges and networks but none of the smaller solutions offer the results that the majors (say, Google AdWords or Facebook Ads) yield. This situation effectively turns them into hostages. Publishers, on the other hand, are subject to more and more rules and restrictions by the networks, which leads to