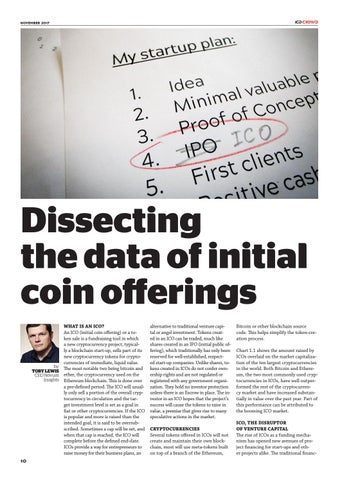 WHAT IS AN ICO? An ICO (initial coin offering) or a token sale is a fundraising tool in which a new cryptocurrency project, typically a blockchain start-up, sells part of its new cryptocurrency tokens for cryptocurrencies of immediate, liquid value. The most notable two being bitcoin and ether, the cryptocurrency used on the Ethereum blockchain. This is done over a pre-defined period. The ICO will usually only sell a portion of the overall cryptocurrency in circulation and the target investment level is set as a goal in fiat or other cryptocurrencies. If the ICO is popular and more is raised than the intended goal, it is said to be oversubscribed. Sometimes a cap will be set, and when that cap is reached, the ICO will complete before the defined end-date. ICOs provide a way for entrepreneurs to raise money for their business plans, an

alternative to traditional venture capital or angel investment. Tokens created in an ICO can be traded, much like shares created in an IPO (initial public offering), which traditionally has only been reserved for well-established, respected start-up companies. Unlike shares, tokens created in ICOs do not confer ownership rights and are not regulated or registered with any government organization. They hold no investor protection unless there is an Escrow in place. The investor in an ICO hopes that the projectâ&#x20AC;&#x2122;s success will cause the tokens to raise in value, a premise that gives rise to many speculative actions in the market. CRYPTOCURRENCIES Several tokens offered in ICOs will not create and maintain their own blockchain, most will use meta-tokens built on top of a branch of the Ethereum,

Bitcoin or other blockchain source code. This helps simplify the token-creation process. Chart 1.1 shows the amount raised by ICOs overlaid on the market capitalization of the ten largest cryptocurrencies in the world. Both Bitcoin and Ethereum, the two most commonly used cryptocurrencies in ICOs, have well outperformed the rest of the cryptocurrency market and have increased substantially in value over the past year. Part of this performance can be attributed to the booming ICO market. ICO, THE DISRUPTOR OF VENTURE CAPITAL The rise of ICOs as a funding mechanism has opened new avenues of project financing for start-ups and other projects alike. The traditional financ- The Gibraltar Blockchain Exchange, AIDAO, Quantstamp and much more...

The Gibraltar Blockchain Exchange, AIDAO, Quantstamp and much more...