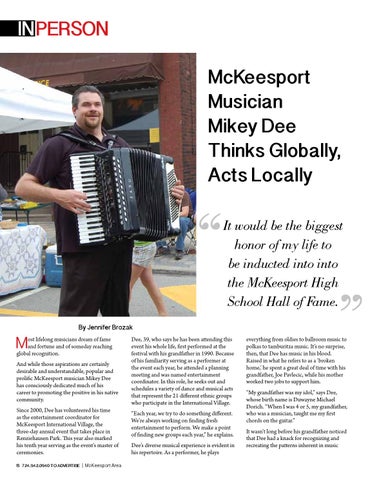 inPerson McKeesport Musician Mikey Dee Thinks Globally, Acts Locally It would be the biggest honor of my life to be inducted into into the McKeesport High School Hall of Fame.

ost lifelong musicians dream of fame and fortune and of someday reaching global recognition. And while those aspirations are certainly desirable and understandable, popular and prolific McKeesport musician Mikey Dee has consciously dedicated much of his career to promoting the positive in his native community. Since 2000, Dee has volunteered his time as the entertainment coordinator for McKeesport International Village, the three-day annual event that takes place in Renziehausen Park. This year also marked his tenth year serving as the event’s master of ceremonies. 8 724.942.0940 to advertise | McKeesport Area

Dee, 39, who says he has been attending this event his whole life, first performed at the festival with his grandfather in 1990. Because of his familiarity serving as a performer at the event each year, he attended a planning meeting and was named entertainment coordinator. In this role, he seeks out and schedules a variety of dance and musical acts that represent the 21 different ethnic groups who participate in the International Village. “Each year, we try to do something different. We’re always working on finding fresh entertainment to perform. We make a point of finding new groups each year,” he explains. Dee’s diverse musical experience is evident in his repertoire. As a performer, he plays

everything from oldies to ballroom music to polkas to tamburitza music. It’s no surprise, then, that Dee has music in his blood. Raised in what he refers to as a 'broken home,' he spent a great deal of time with his grandfather, Joe Pavlecic, while his mother worked two jobs to support him. “My grandfather was my idol,” says Dee, whose birth name is Duwayne Michael Dorich. “When I was 4 or 5, my grandfather, who was a musician, taught me my first chords on the guitar.” It wasn’t long before his grandfather noticed that Dee had a knack for recognizing and recreating the patterns inherent in music 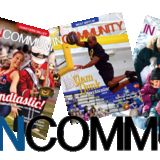