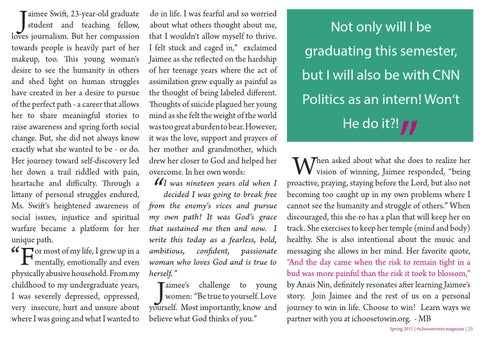 aimee Swift, 23-year-old graduate student and teaching fellow, loves journalism. But her compassion towards people is heavily part of her makeup, too. This young woman‘s desire to see the humanity in others and shed light on human struggles have created in her a desire to pursue of the perfect path - a career that allows her to share meaningful stories to raise awareness and spring forth social change. But, she did not always know exactly what she wanted to be - or do. Her journey toward self-discovery led her down a trail riddled with pain, heartache and difficulty. Through a littany of personal struggles endured, Ms. Swift‘s heightened awareness of social issues, injustice and spiritual warfare became a platform for her unique path. or most of my life, I grew up in a mentally, emotionally and even physically abusive household. From my childhood to my undergraduate years, I was severely depressed, oppressed, very insecure, hurt and unsure about where I was going and what I wanted to

do in life. I was fearful and so worried about what others thought about me, that I wouldn‘t allow myself to thrive. I felt stuck and caged in,” exclaimed Jaimee as she reflected on the hardship of her teenage years where the act of assimilation grew equally as painful as the thought of being labeled different. Thoughts of suicide plagued her young mind as she felt the weight of the world was too great a burden to bear. However, it was the love, support and prayers of her mother and grandmother, which drew her closer to God and helped her overcome. In her own words: I was nineteen years old when I decided I was going to break free from the enemy‘s vices and pursue my own path! It was God‘s grace that sustained me then and now. I write this today as a fearless, bold, ambitious, confident, passionate woman who loves God and is true to herself. ” aimee‘s challenge to young women: “Be true to yourself. Love yourself. Most importantly, know and believe what God thinks of you.”

Not only will I be graduating this semester, but I will also be with CNN

Politics as an intern! Won‘t He do it?!

hen asked about what she does to realize her vision of winning, Jaimee responded, “being proactive, praying, staying before the Lord, but also not becoming too caught up in my own problems where I cannot see the humanity and struggle of others.” When discouraged, this she-ro has a plan that will keep her on track. She exercises to keep her temple (mind and body) healthy. She is also intentional about the music and messaging she allows in her mind. Her favorite quote, “And the day came when the risk to remain tight in a bud was more painful than the risk it took to blossom,” by Anais Nin, definitely resonates after learning Jaimee‘s story. Join Jaimee and the rest of us on a personal journey to win in life. Choose to win! Learn ways we partner with you at ichoosetowin.org. - MB Spring 2015 | #ichoosetowin magazine | 23 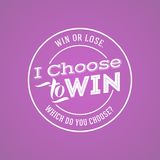 I Choose To Win