THE SERIES IN A NUTSHELL Like most families, the Madikizela-Mandela family is complicated – complex characters and stories that hover in half-truths and never-spoken-about moments. As two granddaughters discover when they follow a path to find the essence of their grandmother, Winnie Madikizela-Mandela. The sisters, Swati Dlamini Mandela and Zaziwe Manaway’s journey filled them with trepidation, wonder, despair and a new respect for their fearless, revolutionary grandmother, whose indomitable spirit helped shape South Africa’s democracy. Their unflinching search also took them to a dark place where the woman they loved stood accused of kidnapping, assault and alleged complicity in murder.

1 THE TRIALS OF WINNIE MANDELA follows two sisters, Swati Dlamini Mandela and Zaziwe Manaway, on a journey to learn more about their grandmother. But this is no ordinary grandmother. This is Winnie Madikizela-Mandela, one of South Africa’s greatest struggle icons – a global figure – one shrouded in myths and mysteries including alleged complicity in kidnapping, assault and murder. THE TRIALS OF WINNIE MANDELA is an intricate examination of an icon, a politician, a grandmother, and a human being. This is a deeply personal story that compels the sisters - and audiences - to grapple with their own understanding of human frailty and the human capacity for good and evil. It is Winnie Madikizela-Mandela herself who asks:

2 Using never-seen-before footage, exclusive interviews with family, friends, commentators, victims and activists, this five-part documentary series is structured around a lunchtime conversation between Winnie Madikizela-Mandela and her two granddaughters. The interactions are frank, they are heartfelt, they are emotional and uncomfortable. Most of all, they provide insight into the complexity of one person who lived an extra-ordinary life. With unprecedented access to the struggle icon, Madikizela-Mandela speaks candidly about her radical politics at odds with her husbandâ&#x20AC;&#x2122;s negotiated settlement, about the abuse she suffered at the hands of the State security police, how she protected the fiery youth from apartheidâ&#x20AC;&#x2122;s death squads, her refusals to play by chauvinist rules, and her unapologetic feelings towards those who judge her to be a sinner.

3 EPISODE ONE | WINIFRED – WARRIOR FOR PEACE uncovers Winnie Madikizela-Mandela the icon. Her relentless bravery over twenty-seven years. Her personal history. How her radical politics were inspired at a young age by two men: her father who taught her the real history of South Africa and former Chancellor of Germany, Otto von Bismarck who proclaimed the supremacy of blood and iron. Chiseling away at Winnie Madikizela-Mandela’s rock-solid political exterior, the granddaughters discover her early life as a wife, mother and soon to be outcast as a maverick political leader. EPISODE TWO | NOMZAMO – MOTHER OF ENDEAVOR examines the fall of the icon as Swati and Zaziwe unravel the many competing narratives regarding their grandmother’s involvement in the kidnapping and assault of several young activists during the mid to late 1980’s in Soweto, including teenage activist Stompie Seipei. Traumatized by these revelations the sisters cautiously probe Madikizela-Mandela on the veracity of these alleged misdeeds and those of her notorious Mandela United Football Club.

4 EPISODE THREE | WINNIE - FAIR AND PURE discovers a rare piece of archive, The High Treason Docket, compiled by the security police to put Madikizela-Mandela in jail for life. And yet no-one from the Apartheid establishment wants to talk about the Docket that disappeared in 1989. Swati and Zaziwe search for evidence that a high level national intelligence operation called STRATCOM is the reason for their grandmother’s fall from grace.

EPISODE FOUR | NOBANDLA – SHE WHO IS OF THE PEOPLE gives a fascinating account of how both the apartheid judiciary and the ANC were compromised in their attempts to make sure that Madikizela-Mandela’s pending court case in 1990 for kidnapping and assault and her radical politics did not threaten the delicate negotiation process. With brutal honesty, Madikizela-Mandela reveals details of her relationship with Nelson Mandela and the reasons for the breakdown of their marriage.

5 EPISODE FIVE | ZANYIWE – TO BE TESTED begins with the shocking and unexpected exhumation in 2013 of the remains of two young men who disappeared from Madikizela-Mandela’s back yard in 1988. A mother’s heart breaks when she finally discovers what happened to her son. Swati and Zaziwe explore what it is to be WINNIE, NOMZAMO, ZANIWYE MANDELA-MADIKIZELA - not just as an icon of the anti-apartheid struggle but as a flesh-and-blood human being. A grandmother who hurts when her granddaughters miss a Sunday lunch. A woman who loves “soapies” and pearls. A daughter who wonders what her late mother would think of her life and how it turned out.

If only I could walk on the sands of time and as I walk on that sand there is a sandstorm that simply erases each time I put my footprint on the ground, and blows over and obliterates those footprints.

DIRECTOR’S STATEMENT 1 “When admiration for a public figure turns into adoration, we get subjugated by that adoration and often get caught up in a culture of unthinking”. (Njabulo Ndebele in his novel The Cry of Winnie Mandela) This was the challenge I faced when granted the opportunity to document Winnie Madikizela-Mandela’s life story in 2013. The weight of responsibility was an immense burden given Madikizela-Mandela’s stature – a delicate dance between greatness and human frailty, between the public and the private, between political constructs and in-between truths. It is this that I have lived for the past six years. An anguished struggle to find a way to tell the story of Madikizela-Mandela in her own words, interwoven with a tapestry of competing voices and the voice of the filmmaker who fails to find one definitive portrayal.

2 I run the African Oral History Archive Project, a multi-media initiative to document the stories of those history makers who have made a difference to the practice of democracy on the continent. And naturally we wanted Winnie Madikizela-Mandela to be part of this archive. I fell in love with Winnie Madikizela-Mandela the moment I met her and her magnetic construction of herself. At the same time, we at the African Oral History Archive are clear that we do not produce hagiographies. We respect the value of critical examination of extraordinary leaders.

3 In the end, I wanted this story to be as much a reflection of who we are, as it is about the life story of Winnie Madikizela-Mandela. How do we grapple with iconic people like artists, politicians, musicians, scientists, to name a few who have made a contribution to our world but at the same time may have committed deplorable acts? How to find the hidden links of humanity that connect people and their actions throughout time?

ABOUT THE AFRICAN ORAL HISTORY ARCHIVE For many decades, South African history was censored and narrated unilaterally by the apartheid regime. The African Oral History Archive (AOHA) aims to safeguard Africa’s dynamic heritage for future generations, giving unprecedented access to all those who have been instrumental in shaping South Africa’s modern history. AOHA is a project of the Ichikowitz Family Foundation, founded by Ivor Ichikowitz,  a South African industrialist and philanthropist whose vision is to research and divulge contemporary South African history through multi-media formats. In recent years they have interviewed hundreds of people who were involved in the political change in South Africa.

PEOPLE INVOLVED IN THE MAKING

Other award-winning documentaries over

New York and South Africa over the past two decades. She won two Emmy Awards

With the Bill Moyers team, as Associate

(Producer and Director) for Calling the Ghosts,

Producer, won the Peabody for PBS,

about the experience of rape during the war

in former Yugoslavia. The documentary was

and Reconciliation Committee. For PBS/

instrumental in the recognition of rape as a

and her work was also featured on CNN, NBC

Dateline and CBS Sixty Minutes in the USA.

directed programs from Bangladesh, Cuba and Rwanda. Select others include Locked

Up (Discovery/TLC), Defying Genocide (US

media initiative that produces a range of

Member of the USA National Academy

years of Democracy, Jacobson produced and

Makers Series that was broadcast across the

Continent. One of the flagship films, Plot for

Award from the South African Minister of Arts

and Culture (2001.) Jacobson was selected to

It has garnered over 8 international awards

2007 with her feature film, Miriam Makeba.

and was released on NETFLIX.

harassment in the Film and Television

filmmaker and photographer. Her first

Industry in South Africa.  She was

selected as one of the 100 Young

and IDFA and won multiple awards

including the Amnesty International

Aliki is a co-owner of Elafos Productions, a women led and run

Aliki sat on the first board for SWIFT

(Sisters Working in Film and Television

company in South Africa, and she has

been freelancing for Indelible Media

research and interventions in sexual

A Country Imagined, Episode 9 for

and researcher. Her directing credits

include: A Question of Madness (1998), The Man Who Knows Too Much

Liza is the director of the SCRAWL

Screenwriters Laboratory and has an

MA in Ethnomusicology and Film

Bearing Witness: 30 Years of the

for the ‘Healing Power of Nature’

corporate/ government on equality and

young leader, who is passionate about

diversity for those living with disabilities.

being a change agent for future generations. She believes that we all

have to be the change we want to see

a book written by her grandmother

in the world. Her support of education

that details the brutality she lived under

and literary, through the Mandela library

the apartheid state. She also wrote the

Container Project has delivered over a

forward to the book “The Prison Letters

60 container libraries in South Africa in

the last 5 years. Every library delivered

a collection of Nelson Mandela prison

letters spanning the 27 years he was

held as a political prisoner.

Having worked on the 21 Icons project,

African women who turned her family

celebrity status into a global platform to

Desmond Tutu and F.W. De Klerk she was

stories to be told and to challenge

the chief fundraiser and spokesperson.

and that future generations need to learn the

philanthropist. He began his career during South Africa’s political transition in the early

Ivor Ichikowitz has shared a long-term

She called him to break the news of Madiba’s

normalisation and integration into the

African Continent and the global economy.

deepest concerns for the country’s progress.

This documentary series is Ichikowitz’s tribute Ichikowitz is a firm believer in the African ethos of ubuntu; he exists because of others and it is this philosophy which underpins his

commitment to philanthropy through the

Making this movie was not just another

responsibility. When I was growing up,

has committed itself to the kind of active

citizenship that promotes the preservation of

as the ‘swart duiwel/black devil’.

Africa’s heritage, the education of its people

Then I had the privilege of meeting her.

the conservation of the environment. It’s African Oral History Archive is borne out of

For me, Mama Winnie – in all her

Ichikowitz’s passion for history, his belief that

complexities, and in fact because of them

redemption is borne out of remembering

– is an inspiration to us all. 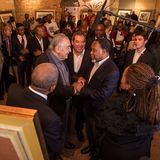 "The Trials of Winnie Mandela"

"The Trials of Winnie Mandela"