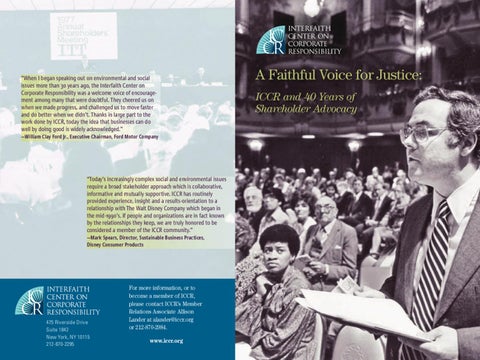 “When I began speaking out on environmental and social issues more than 30 years ago, the Interfaith Center on Corporate Responsibility was a welcome voice of encouragement among many that were doubtful. They cheered us on when we made progress, and challenged us to move faster and do better when we didn’t. Thanks in large part to the work done by ICCR, today the idea that businesses can do well by doing good is widely acknowledged.” —William Clay Ford Jr., Executive Chairman, Ford Motor Company

“Today’s increasingly complex social and environmental issues require a broad stakeholder approach which is collaborative, informative and mutually supportive. ICCR has routinely provided experience, insight and a results-orientation to a relationship with The Walt Disney Company which began in the mid-1990’s. If people and organizations are in fact known by the relationships they keep, we are truly honored to be considered a member of the ICCR community.” —Mark Spears, Director, Sustainable Business Practices, Disney Consumer Products

For more information, or to become a member of ICCR, please contact ICCR’s Member Relations Associate Allison Lander at alander@iccr.org or 212-870-2984. www.iccr.org

A Faithful Voice for Justice: ICCR and 40 Years of Shareholder Advocacy

Religious Investors and Shareholder Advocacy n the 400 years since the creation of the corporate entity, people of faith have consistently spoken out about the social impact of capital. Jewish, Christian and Muslim leaders have long recognized practices to encourage ethical investments while identifying investments to avoid. During colonial times in North America, both the Quakers and Methodists explicitly avoided investments that supported the slave trade. Muslims have had strict prohibitions against interest-bearing investments. Likewise, Judaism and Catholic teachings are clear on the responsibility to attend to the needs of the poor.

These foundational teachings are woven throughout the 40-year history of the Interfaith Center on Corporate Responsibility and contribute to its ever-growing influence over four decades of shareholder advocacy. Although most religious investors continue to avoid investing in activities contrary to the tenets of their faith — i.e. “sin stocks” — the level of sophistication demonstrated by religious investors and their allies has grown far beyond avoidance.

The history of ICCR is the story behind that growing sophistication in approach and influence. In strengthening the voices of religious and values-based investors, ICCR brought the field of shareholder advocacy to full light. Forty years from its founding, shareholders around the world are using engagement practices refined by ICCR members throughout years of faithful, persistent action. The timeline that follows tells the story of a pioneering vision, a relentless pursuit of justice and sustainability

through active share ownership and transformational dialogue. When one surveys contemporary shareholder advocacy, one sees a generation of advocates following the example set by ICCR and its founders. The voices that have long been “inspired by faith; committed to action” grow every day more committed and more faithful thanks to the influence, ideas and persistence of those early pioneers.

“No, I won’t see either you or your Bishop. The Episcopal Church has no business getting into the matter whether as a stockholder or otherwise. You can send me a memorandum if you wish.”

During the 20th century the interna— anonymous mining company executive, 1970 tional centers of power began shifting organizations soon joined the campaign, from the capitals of national governand organized themselves as the ad hoc ments to the headquarters and boardInter-Faith Committee on Social rooms of the world’s biggest compaResponsibility in Investment, which nies. Corporations and the capital they became the Interfaith Center on wielded developed an extraordinary Corporate Responsibility. influence on global economies, government policies and hence, people Churches vs. and the environment. The Multi-Nationals Accustomed to more compliant investors, corporations bristled at this check on their power and pushed back by tightening the rules around the filing of resolutions and waiting until the last minute to disclose the dates of annual general meetings and holding them in out-of-the-way locations to limit shareholder participation.

Apartheid: A Galvanizing Issue for Faith Groups In the early ’70s, the abhorrent policy of apartheid, the legislated segregation of races in South Africa, became a clarion call to action for faith communities. In 1971, the Episcopal Church in the U.S.A. filed the first religious-sponsored shareholder resolution with General Motors requesting that the company withdraw its operations until apartheid was abolished. Other faith

The 1980s Led by ICCR, churches and pension systems filed 185 shareholder resolutions on apartheid during the summer of 1986. On October 20, 1986 General Motors announced it was selling its South African investments, followed the next day by IBM “For the past few years, we have watched helplessly as declaring its intention to withdraw — both ‘well-intentioned’ sharehistoric victories. The holders have bombarded trickle of U.S. corporaand overloaded the proxy statements of issuers with tions withdrawing proposals which are at best from South Africa occasionally constructive became a flood, with and at worst absurd fifty U.S. corporations and often times more leaving South Africa appropriate for the during 1986 alone. platform of a politician.” — A. Joseph Dowd, Corporate During the ’80s ICCR Secretary, American Electric members also focused Power, 1983 on the negative portrayal of women and minorities in advertising campaigns. An example was their work with Colgate Palmolive on its “Darkie” brand of toothpaste, which featured a minstrel character in blackface.

Social Investing and Improving Access to Capital Seeing another opportunity to leverage their investments for the common good, in the early ’80s ICCR members launched a Clearinghouse on Alternative Investment to encourage faith community participation in community economic development. Hundreds of millions of dollars were earmarked for projects such as affordable housing, enterprise development, and worker-owned businesses, while community loan funds and banks were urged to broaden their credit offerings to women, minorities and inner city communities. By 1995, these “impact investments” would exceed $300 million.

The Coalition Diversifies In the ’80s, ICCR diversified to include nonfaith-based institutional investors eager to address social justice issues. In 1982, Calvert Group joined ICCR as its first non-faith-based member, and became the first money market fund to launch a social screen for investments. Throughout the ’80s unions and some of the country’s largest pension funds, including TIAA-CREF and those of the states of New York, California, Wisconsin and Minnesota, joined faith-based investors in challenging the companies in their portfolios to improve their social and environmental practices.

“Before now our shareholders have always been loyal.”

“The magic of this process is that the proxy lands on the desk of every important institutional investor. It can’t be thrown in the wastebasket without being opened. The trustees actually have to look at it.”

The 1990s Acting on the Environment In the wake of the Love Canal and Three Mile Island disasters, the EPA passed the Superfund Act and tightened environmental regulations. Shareholder activists applied pressure from the inside by urging companies to adopt voluntary initiatives for waste reduction, energy conservation and public safety like the Valdez and CERES Principles.

Sweat Shop Labor In the mid-’90s, ICCR members conducted “purchasing power studies” and turned their attention to the sweatshop conditions in the maquiladoras, the approximately 2,100 mostly U.S.owned plants, situated in Mexico along the U.S. border. ICCR members helped found the tri-national Coalition for Justice in the Maquiladoras, which seeks to improve the lives of workers. ICCR also joined President Clinton’s White House Apparel Industry Partnership, which adopted a code of conduct for suppliers and principles for monitoring that became the indus-

try standard. In 1995, ICCR published the Principles for Global Corporate Responsibility, guidelines to transform the way corporations relate to communities and the environment.

Battling Big Tobacco Throughout the ’90s, ICCR members used their power as shareholders to help limit public health risks by asking tobacco companies to include warning labels on their products & advertising, and requesting that they refrain from lobbying against legislation aimed at regulating tobacco and smoking.

“We realize we have a commitment to our communities.” — Carol Weber,

As an interfaith Knight-Ridder, 1996 organization, ICCR had a unique role in Northern Ireland, working across faith lines toward equality of opportunity and an end to religious discrimination in the workplace. ICCR members filed scores of shareholder resolutions asking companies to implement The MacBride Principles on Fair Employment in Northern Ireland. ICCR also called on companies to cut their ties to the notoriously repressive military government of Burma (Myanmar).

ICCR’s members are now regarded as serious investors with the ability to foretell the emerging social and environmental issues that lead to business risk. Most Fortune 500 companies have corporate responsibility departments and are formally disclosing their environmental and social impacts. Companies “Over the years, The Coca- resisting this progress are Cola Company built a subject to poor relationship of trust and Environmental, respect with ICCR as we worked together to address Social, many challenges facing our Governance company. This collabora(ESG) ratings tion on a range of issues that will directly from workplace rights to impact company water stewardship has truly reputation and, led to improvement in our consequently, policies and practices.” share price. — Mark Preisinger, Director While it is no of Corporate Governance, The Coca-Cola Company, 2011 longer uncommon for shareholder proposals to win investor support of 30 percent or more, the practice of filing resolutions is gradually being replaced by productive investor dialogues. By 2010, professionally managed assets following SRI strategies were valued at $3.07 trillion.

In the course of 40 years, the CSR movement has developed into a serious field, as evidenced by the explosion of “social” investment firms and the burgeoning CSR staffs at most Fortune 500 companies. Helping to drive this growth is a demand for “green,” “fair trade” and “ethically sourced” products, and discriminating investors who only buy stock in companies able to meet increasingly stringent ESG standards. These investors are empowered in their choices by a proliferation of organizations dedicated to promoting shareholder advocacy.

An ICCR dialogue with Hormel.

We are grateful to the many pioneers in shareholder advocacy who first envisioned the possibility of transforming corporate practices for the common good. Their faith has inspired generations and their wisdom continues to guide our organization. As Nelson Mandela said, “After climbing a great hill, one finds many more to climb.”

We pause briefly at this summit to admire the view, and with a renewed sense of purpose, continue forward. Design: Kathryn Brewer 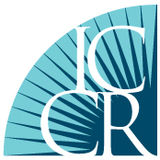 A Faithful Voice for Justice

A Faithful Voice for Justice