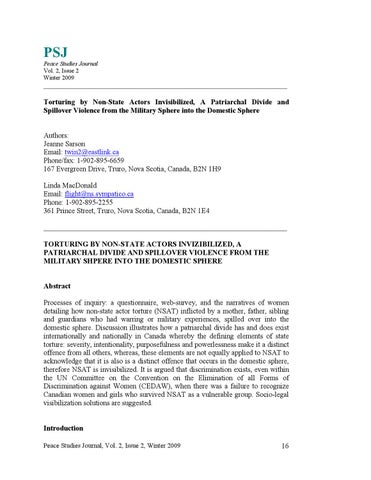 Abstract Processes of inquiry: a questionnaire, web-survey, and the narratives of women detailing how non-state actor torture (NSAT) inflicted by a mother, father, sibling and guardians who had warring or military experiences, spilled over into the domestic sphere. Discussion illustrates how a patriarchal divide has and does exist internationally and nationally in Canada whereby the defining elements of state torture: severity, intentionality, purposefulness and powerlessness make it a distinct offence from all others, whereas, these elements are not equally applied to NSAT to acknowledge that it is also is a distinct offence that occurs in the domestic sphere, therefore NSAT is invisibilized. It is argued that discrimination exists, even within the UN Committee on the Convention on the Elimination of all Forms of Discrimination against Women (CEDAW), when there was a failure to recognize Canadian women and girls who survived NSAT as a vulnerable group. Socio-legal visibilization solutions are suggested. Peace Studies Journal is a peer-reviewed online free academic journal dedicated to the field of peace and conflict studies.

Peace Studies Journal is a peer-reviewed online free academic journal dedicated to the field of peace and conflict studies.