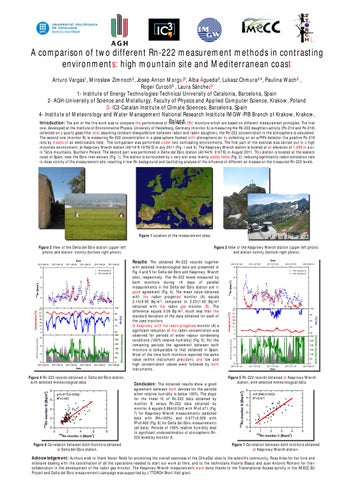 A comparison of two different Rn-222 measurement methods in contrasting environments: high mountain site and Mediterranean coast Arturo Vargas1, Miroslaw Zimnoch2, Josep Anton Morguí3, Alba Àgueda3, Lukasz Chmura2,4, Paulina Wach2 , Roger Curcoll3 , Laura Sánchez3 1- Institute of Energy Technologies-Technical University of Catalonia, Barcelona, Spain 2- AGH-University of Science and Metallurgy, Faculty of Physics and Applied Computer Science, Krakow, Poland 3- IC3-Catalan Institute of Climate Sciences, Barcelona, Spain 4- Institute of Meteorology and Water Management National Research Institute IMGW-PIB Branch of Krakow, Krakow, Poland Introduction: The aim of the this work was to compare the performance of two radon (Rn) monitors which are based on different measurement principles. The first one, developed at the Institute of Environmental Physics, University of Heidelberg, Germany (monitor A) is measuring the Rn-222 daughters activity (Po-214 and Po-218) collected on a quartz glass filter and, assuming constant disequilibrium between radon and radon daughters, the Rn-222 concentration in the atmosphere is calculated. The second one (monitor B) is measuring Rn-222 concentration in a glass sphere flushed with atmospheric air by collecting on an α-PIPs detector the positive Po-218 ions by means of an electrostatic field. The comparison was performed under two contrasting environments. The first part of the exercise was carried out in a high mountain environment, at Kasprowy Wierch station (49°14’N 19°59’E) in July 2011 (Fig. 1 and 3). The Kasprowy Wierch station is located at an elevation of 1,989 m a.s.l. in Tatra mountains, Southern Poland. The second part was performed in Delta del Ebro station (40°44&#39;N 0°47&#39;E) in August 2011. This station is located at the eastern coast of Spain, near the Ebro river estuary (Fig. 1). The station is surrounded by a very wet area, mainly paddy fields (Fig. 2), reducing significantly radon exhalation rate in close vicinity of the measurement site, resulting in low Rn background and facilitating analysis of the influence of different air masses on the measured Rn-222 levels.

Results: The obtained Rn-222 records together with selected meteorological data are presented in Fig. 4 and 5 for Delta del Ebro and Kasprowy Wierch sites, respectively. The Rn-222 levels measured by both monitors during 10 days of parallel measurements in the Delta del Ebro station are in good agreement (Fig. 4). The mean value obtained with the radon progenies monitor (A) equals 2.14±0.95 Bq/m3, compared to 2.23±1.02 Bq/m3 obtained with the radon gas monitor (B). The difference equals 0.09 Bq/m3, much less than the standard deviation of the data obtained for each of the used monitors. In Kasprowy, with the radon progenies monitor (A) a significant reduction of the radon concentration was observed for periods of water vapour condensing conditions (100% relative humidity) (Fig. 5). For the remaining periods the agreement between both monitors is comparable to that obtained in Spain. Most of the time both monitors reported the same value (within instrument precision), and low and high concentration values were followed by both instruments . Figure 4 Rn-222 records obtained at Delta del Ebro station, with selected meteorological data.

agreement between both devices for the periods when relative humidity is below 100%. The slope for the linear fit of Rn-222 data obtained by monitor B versus Rn-222 data obtained by monitor A equals 0.984±0.042 with R2=0.471 (Fig. 7) for Kasprowy Wierch measurements (selected data with RH&lt;100%) and 0.977±0.029 with R2=0.462 (Fig. 6) for Delta del Ebro measurements (all data). Periods of 100% relative humidity lead to significant underestimation of atmospheric Rn222 levels by monitor A. Figure 6 Correlation between both monitors obtained at Delta del Ebro station.

Figure 7 Correlation between both monitors obtained at Kasprowy Wierch station.

Acknowledgement: Authors wish to thank Xavier Rodó for promoting the overall openness of the ClimaDat sites to the scientific community, Rosa Arias for her kind and intensive dealing with the coordination of all the operations needed to start our work at time, and to the technicians Vicente Blasco and Juan Antonio Romero for their collaboration in the development of the radon gas monitor. The Kasprowy Wierch measurements were done thanks to the Transnational Access activity in the IMECC EU Project and Delta del Ebro measurements campaign was supported by a TTORCH Short Visit grant. 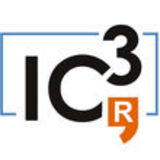