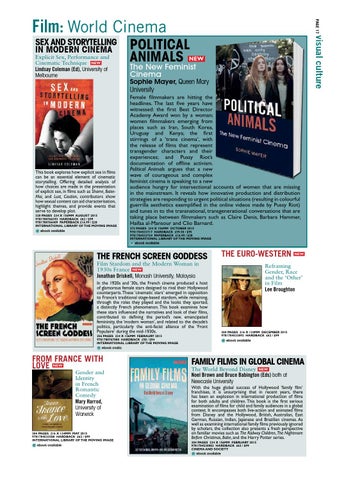 This book explores how explicit sex in films can be an essential element of cinematic storytelling. Offering detailed analysis of how choices are made in the presentation of explicit sex, in films such as Shame, BaiseMoi, and Lust, Caution, contributors show how sexual content can aid characterisation, highlight themes, and provide events that serve to develop plot. 320 pages 234 x 156mm August 2015 9781780766393 Hardback £62 / $99 9781780766409 Paperback £16.99 / $28 International Library of the Moving Image

Sex and Storytelling in Modern Cinema

Sophie Mayer, Queen Mary University Female filmmakers are hitting the headlines. The last five years have witnessed: the first Best Director Academy Award won by a woman; women filmmakers emerging from places such as Iran, South Korea, Uruguay and Kenya; the first stirrings of a ‘trans cinema’, with the release of films that represent transgender characters and their experiences; and Pussy Riot’s documentation of offline activism. Political Animals argues that a new wave of courageous and complex feminist cinema is speaking to a new audience hungry for intersectional accounts of women that are missing in the mainstream. It reveals how innovative production and distribution strategies are responding to urgent political situations (resulting in colourful guerrilla aesthetics exemplified in the online videos made by Pussy Riot) and tunes in to the transnational, transgenerational conversations that are taking place between filmmakers such as Claire Denis, Barbara Hammer, Haifaa al-Mansour and Clio Barnard. 272 Pages 234 x 156mm October 2015 9781784533717 Hardback £59.50 / $95 9781784533724 Paperback £16.99 / $28 International Library of the Moving Image e ebook available

In the 1920s and ‘30s, the French cinema produced a host of glamorous female stars designed to rival their Hollywood counterparts. These ‘cinematic stars’ emerged in opposition to France’s traditional stage-based stardom, while remaining, through the roles they played and the looks they sported, a distinctly French phenomenon. This book examines how these stars influenced the narratives and look of their films, contributed to defining the period’s new, emancipated femininity, the ‘modern woman’, and related to the decade’s politics, particularly the anti-facist alliance of the ‘Front Populaire’ during the mid-1930s. 256 Pages 234 x 156mm Febraury 2015 9781780767000 Hardback £58 / $94 International Library of the Moving Image

Reframing Gender, Race and the ‘Other’ in Film Lee Broughton

From France with Love NEW

With the huge global success of Hollywood ‘family film’ franchises, it is unsurprising that in recent years, there has been an explosion in international production of films for both adults and children. This book is the first serious examination of films for child and family audiences in a global context. It encompasses both live-action and animated films from Disney and the Hollywood, British, Australian, East German, Russian, Indian, Japanese and Brazilian cinemas. As well as examining international family films previously ignored by scholars, the collection also presents a fresh perspective on familiar movies such as The Railway Children, The Nightmare Before Christmas, Babe, and the Harry Potter series. 304 Pages 234 x 156mm February 2015 9781784530082 Hardback £62 / $99 Cinema and Society e ebook available 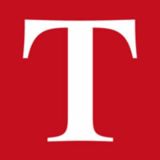