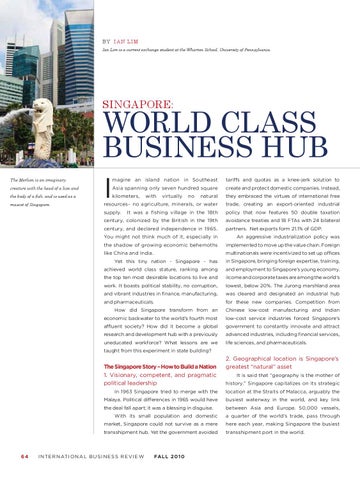 BY I A N LIM Ian Lim is a current exchange student at the Wharton School, University of Pennsylvania.

The Merlion is an imaginary creature with the head of a lion and the body of a Àsh, and is used as a mascot of Singapore.

tariffs and quotas as a knee-jerk solution to

create and protect domestic companies. Instead,

they embraced the virtues of international free

resources– no agriculture, minerals, or water

It was a ﬁshing village in the 18th

century, colonized by the British in the 19th

avoidance treaties and 18 FTAs with 24 bilateral

century, and declared independence in 1965.

You might not think much of it, especially in

the shadow of growing economic behemoths

implemented to move up the value chain. Foreign

multinationals were incentivized to set up offices

Yet this tiny nation - Singapore - has

and employment to Singapore’s young economy.

the top ten most desirable locations to live and

iIcome and corporate taxes are among the world’s

lowest, below 20%. The Jurong marshland area

and vibrant industries in ﬁnance, manufacturing,

was cleared and designated an industrial hub

for these new companies. Competition from

How did Singapore transform from an

economic backwater to the world’s fourth most

affluent society? How did it become a global

government to constantly innovate and attract

research and development hub with a previously

uneducated workforce? What lessons are we

taught from this experiment in state building?

The Singapore Story – How to Build a Nation 1. Visionary, competent, and pragmatic political leadership

2. Geographical location is Singapore’s greatest “natural” asset It is said that “geography is the mother of history.” Singapore capitalizes on its strategic

In 1963 Singapore tried to merge with the

location at the Straits of Malacca, arguably the

Malaya. Political differences in 1965 would have

busiest waterway in the world, and key link

the deal fall apart; it was a blessing in disguise.

With its small population and domestic

a quarter of the world’s trade, pass through

market, Singapore could not survive as a mere

transshipment hub. Yet the government avoided

transshipment port in the world.