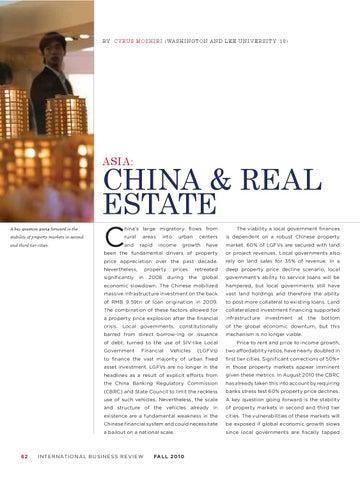 A key question going forward is the stability of property markets in second and third tier cities.

market. 60% of LGFVs are secured with land

been the fundamental drivers of property

price appreciation over the past decade.

government’s ability to service loans will be

hampered, but local governments still have

massive infrastructure investment on the back

The combination of these factors allowed for

a property price explosion after the ﬁ nancial

of the global economic downturn, but this

barred from direct borrow-ing or issuance

mechanism is no longer viable.

of debt, turned to the use of SIV-like Local Government

The viability a local government ﬁnances

is dependent on a robust Chinese property

Price to rent and price to income growth, two affordability ratios, have nearly doubled in

to ﬁnance the vast majority of urban ﬁxed

asset investment. LGFVs are no longer in the

in those property markets appear imminent

headlines as a result of explicit efforts from

given these metrics. In August 2010 the CBRC

(CBRC) and State Council to limit the reckless

use of such vehicles. Nevertheless, the scale

A key question going forward is the stability

and structure of the vehicles already in

of property markets in second and third tier

existence are a fundamental weakness in the

cities. The vulnerabilities of these markets will

a bailout on a national scale.

since local governments are ﬁscally tapped