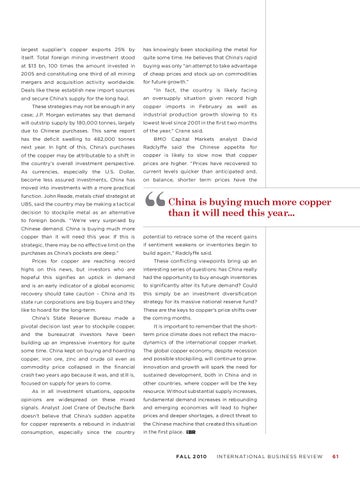 has knowingly been stockpiling the metal for

quite some time. He believes that China’s rapid

buying was only “an attempt to take advantage

2005 and constituting one third of all mining

of cheap prices and stock up on commodities

Deals like these establish new import sources and secure China’s supply for the long haul.

“In fact, the country is likely facing an oversupply situation given record high

These strategies may not be enough in any

copper imports in February as well as

industrial production growth slowing to its

will outstrip supply by 180,000 tonnes, largely

lowest level since 2001 in the ﬁ rst two months

due to Chinese purchases. This same report

of the year,” Crane said.

next year. In light of this, China’s purchases

of the copper may be attributable to a shift in

copper is likely to slow now that copper

prices are higher. “Prices have recovered to

As currencies, especially the U.S. Dollar,

current levels quicker than anticipated and,

on balance, shorter term prices have the

moved into investments with a more practical function. John Reade, metals chief strategist at UBS, said the country may be making a tactical decision to stockpile metal as an alternative to foreign bonds. “We’re very surprised by

China is buying much more copper than it will need this year...

Chinese demand. China is buying much more copper than it will need this year. If this is

potential to retrace some of the recent gains

strategic, there may be no effective limit on the

if sentiment weakens or inventories begin to

purchases as China’s pockets are deep.”

Prices for copper are reaching record

These conﬂicting viewpoints bring up an

highs on this news, but investors who are

hopeful this signiﬁes an uptick in demand

had the opportunity to buy enough inventories

and is an early indicator of a global economic

to signiﬁcantly alter its future demand? Could

recovery should take caution – China and its

this simply be an investment diversiﬁcation

state run corporations are big buyers and they

These are the keys to copper’s price shifts over

the coming months. It is important to remember that the short-

term price climate does not reﬂect the macro-

building up an impressive inventory for quite

dynamics of the international copper market.

some time. China kept on buying and hoarding

The global copper economy, despite recession

copper, iron ore, zinc and crude oil even as

and possible stockpiling, will continue to grow.

Innovation and growth will spark the need for

crash two years ago because it was, and still is,

sustained development, both in China and in

focused on supply for years to come.

other countries, where copper will be the key

As in all investment situations, opposite

opinions are widespread on these mixed

and emerging economies will lead to higher

prices and deeper shortages, a direct threat to

for copper represents a rebound in industrial

the Chinese machine that created this situation

consumption, especially since the country

in the ﬁrst place. iBR