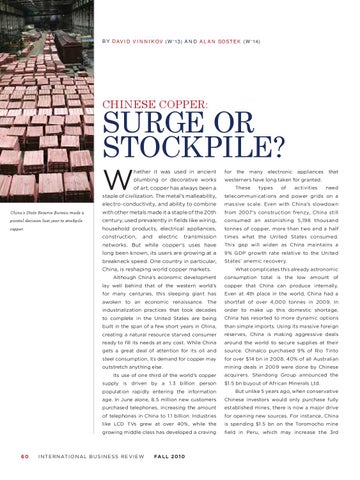 SURGE OR STOCKPILE? W hether it was used in ancient

westerners have long taken for granted.

of art, copper has always been a

staple of civilization. The metal’s malleability,

telecommunications and power grids on a

electro-conductivity, and ability to combine

massive scale. Even with China’s slowdown

China’s State Reserve Bureau made a

with other metals made it a staple of the 20th

tonnes of copper, more than two and a half

times what the United States consumed.

networks. But while copper’s uses have

This gap will widen as China maintains a

long been known, its users are growing at a

breakneck speed. One country in particular,

consumption total is the low amount of

lay well behind that of the western world’s

copper that China can produce internally.

for many centuries, this sleeping giant has

Even at 4th place in the world, China had a

awoken to an economic renaissance. The

order to make up this domestic shortage,

to complete in the United States are being

built in the span of a few short years in China,

ready to ﬁll its needs at any cost. While China

around the world to secure supplies at their

gets a great deal of attention for its oil and

steel consumption, its demand for copper may

mining deals in 2009 were done by Chinese

Its use of one third of the world’s copper supply is driven by a 1.3 billion person

What complicates this already astronomic

But unlike 5 years ago, when conservative

Chinese investors would only purchase fully

established mines, there is now a major drive

of telephones in China to 1.1 billion. Industries

is spending $1.5 bn on the Toromocho mine

ﬁ eld in Peru, which may increase the 3rd