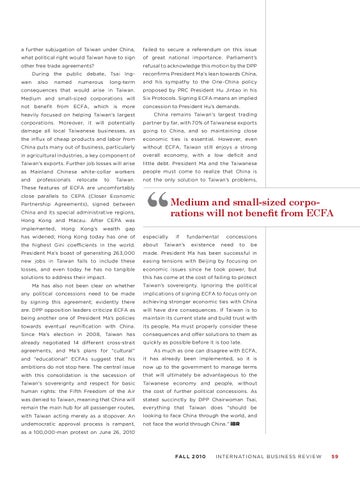 a further subjugation of Taiwan under China,

failed to secure a referendum on this issue

refusal to acknowledge this motion by the DPP

During the public debate, Tsai Ing-

consequences that would arise in Taiwan.

proposed by PRC President Hu Jintao in his

Medium and small-sized corporations will

not beneﬁ t from ECFA, which is more

corporations. Moreover, it will potentially

partner by far, with 70% of Taiwanese exports

damage all local Taiwanese businesses, as

going to China, and so maintaining close

the inﬂ ux of cheap products and labor from

economic ties is essential. However, even

China puts many out of business, particularly

in agricultural industries, a key component of

overall economy, with a low deﬁ cit and

people must come to realize that China is

not the only solution to Taiwan’s problems,

Medium and small-sized corporations will not beneÀt from ECFA

Partnership Agreements), signed between China and its special administrative regions, Hong Kong and Macau. After CEPA was implemented,

has widened; Hong Kong today has one of

the highest Gini coeffi cients in the world.

made. President Ma has been successful in

new jobs in Taiwan fails to include these

easing tensions with Beijing by focusing on

losses, and even today he has no tangible

economic issues since he took power, but

solutions to address their impact.

this has come at the cost of failing to protect

Ma has also not been clear on whether

any political concessions need to be made

implications of signing ECFA to focus only on

by signing this agreement; evidently there

will have dire consequences. If Taiwan is to

being another one of President Ma’s policies

maintain its current state and build trust with

towards eventual reuniﬁ cation with China.

its people, Ma must properly consider these

consequences and off er solutions to them as

quickly as possible before it is too late.

agreements, and Ma’s plans for “cultural”

As much as one can disagree with ECFA,

and “educational” ECFAs suggest that his

it has already been implemented, so it is

ambitions do not stop here. The central issue

with this consolidation is the secession of

that will ultimately be advantageous to the

Taiwan’s sovereignty and respect for basic

Taiwanese economy and people, without

human rights: the Fifth Freedom of the Air

the cost of further political concessions. As

was denied to Taiwan, meaning that China will

remain the main hub for all passenger routes,

everything that Taiwan does “should be

with Taiwan acting merely as a stopover. An

looking to face China through the world, and

not face the world through China.” iBR