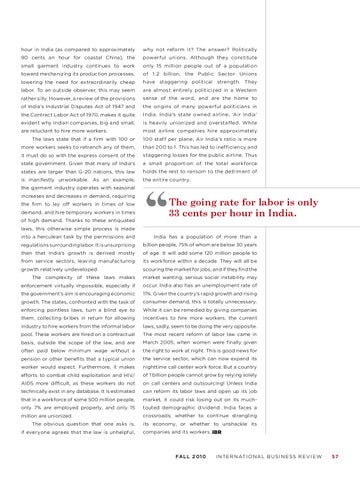 hour in India (as compared to approximately

why not reform it? The answer? Politically

90 cents an hour for coastal China), the

powerful unions. Although they constitute

only 15 million people out of a population

toward mechanizing its production processes,

of 1.2 billion, the Public Sector Unions

lowering the need for extraordinarily cheap

have staggering political strength. They

labor. To an outside observer, this may seem

are almost entirely politicized in a Western

rather silly. However, a review of the provisions

sense of the word, and are the home to

of India’s Industrial Disputes Act of 1947 and

the origins of many powerful politicians in

the Contract Labor Act of 1970, makes it quite

is heavily unionized and overstaffed. While

are reluctant to hire more workers.

more workers seeks to retrench any of them,

than 200 to 1. This has led to inefficiency and

it must do so with the express consent of the

state government. Given that many of India’s

a small proportion of the total workforce

states are larger than G-20 nations, this law

holds the rest to ransom to the detriment of

is manifestly unworkable. As an example,

The going rate for labor is only 33 cents per hour in India.

laws, this otherwise simple process is made into a herculean task by the permissions and

India has a population of more than a

regulations surrounding labor. It is unsurprising

then that India’s growth is derived mostly

of age. It will add some 120 million people to

its workforce within a decade. They will all be

scouring the market for jobs, and if they ﬁnd the

The complexity of these laws makes

occur. India also has an unemployment rate of

the government’s aim is encouraging economic

11%. Given the country’s rapid growth and rising

growth. The states, confronted with the task of

consumer demand, this is totally unnecessary.

While it can be remedied by giving companies

them, collecting bribes in return for allowing

industry to hire workers from the informal labor

laws, sadly, seem to be doing the very opposite.

pool. These workers are hired on a contractual

The most recent reform of labor law came in

basis, outside the scope of the law, and are

March 2005, when women were ﬁ nally given

often paid below minimum wage without a

the right to work at night. This is good news for

pension or other beneﬁts that a typical union

the service sector, which can now expand its

worker would expect. Furthermore, it makes

AIDS more difficult, as these workers do not

on call centers and outsourcing! Unless India

technically exist in any database. It is estimated

can reform its labor laws and open up its job

that in a workforce of some 500 million people,

market, it could risk losing out on its much-

only 7% are employed properly, and only 15

crossroads; whether to continue strangling

The obvious question that one asks is, if everyone agrees that the law is unhelpful,

its economy, or whether to unshackle its companies and its workers. iBR