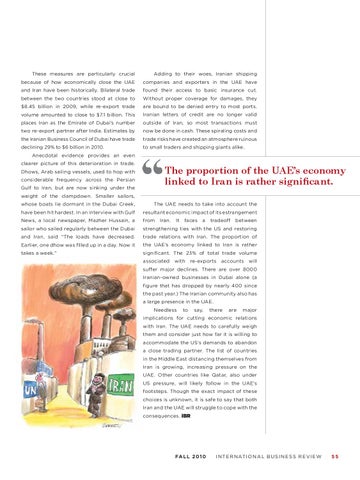 These measures are particularly crucial

Adding to their woes, Iranian shipping

because of how economically close the UAE

companies and exporters in the UAE have

and Iran have been historically. Bilateral trade

between the two countries stood at close to

Without proper coverage for damages, they

are bound to be denied entry to most ports.

volume amounted to close to $7.1 billion. This

Iranian letters of credit are no longer valid

places Iran as the Emirate of Dubai’s number

outside of Iran, so most transactions must

now be done in cash. These spiraling costs and

the Iranian Business Council of Dubai have trade

Anecdotal evidence provides an even clearer picture of this deterioration in trade.

The proportion of the UAE’s economy linked to Iran is rather signiÀcant.

Dhows, Arab sailing vessels, used to hop with considerable frequency across the Persian Gulf to Iran, but are now sinking under the weight of the clampdown. Smaller sailors, whose boats lie dormant in the Dubai Creek,

have been hit hardest. In an interview with Gulf

resultant economic impact of its estrangement

sailor who sailed regularly between the Dubai

strengthening ties with the US and restoring

and Iran, said “The loads have decreased.

trade relations with Iran. The proportion of

Earlier, one dhow was ﬁlled up in a day. Now it

the UAE’s economy linked to Iran is rather

signiﬁcant. The 23% of total trade volume

suffer major declines. There are over 8000 Iranian-owned businesses in Dubai alone (a ﬁgure that has dropped by nearly 400 since the past year.) The Iranian community also has a large presence in the UAE. Needless

implications for cutting economic relations with Iran. The UAE needs to carefully weigh them and consider just how far it is willing to accommodate the US’s demands to abandon a close trading partner. The list of countries in the Middle East distancing themselves from Iran is growing, increasing pressure on the UAE. Other countries like Qatar, also under US pressure, will likely follow in the UAE’s footsteps. Though the exact impact of these choices is unknown, it is safe to say that both Iran and the UAE will struggle to cope with the consequences. iBR