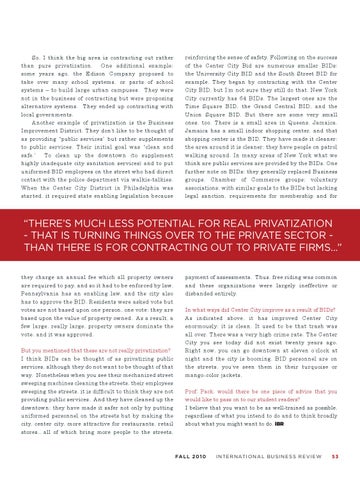 So, I think the big area is contracting out rather than pure privatization. One additional example: some years ago, the Edison Company proposed to take over many school systems, or parts of school systems – to build large urban campuses. They were not in the business of contracting but were proposing alternative systems. They ended up contracting with local governments. Another example of privatization is the Business Improvement District. They don’t like to be thought of as providing “public services” but rather supplements to public services. Their initial goal was “clean and safe.” To clean up the downtown (to supplement highly inadequate city sanitation services) and to put uniformed BID employees on the street who had direct contact with the police department via walkie-talkies. When the Center City District in Philadelphia was started, it required state enabling legislation because

reinforcing the sense of safety. Following on the success of the Center City Bid are numerous smaller BIDs: the University City BID and the South Street BID for example. They began by contracting with the Center City BID, but I’m not sure they still do that. New York City currently has 64 BIDs. The largest ones are the Time Square BID, the Grand Central BID, and the Union Square BID. But there are some very small ones, too. There is a small area in Queens, Jamaica. Jamaica has a small indoor shopping center, and that shopping center is the BID. They have made it cleaner: the area around it is cleaner; they have people on patrol walking around. In many areas of New York what we think are public services are provided by the BIDs. One further note on BIDs: they generally replaced Business groups, Chamber of Commerce groups; voluntary associations, with similar goals to the BIDs but lacking legal sanction, requirements for membership and for

“THERE’S MUCH LESS POTENTIAL FOR REAL PRIVATIZATION - THAT IS TURNING THINGS OVER TO THE PRIVATE SECTOR THAN THERE IS FOR CONTRACTING OUT TO PRIVATE FIRMS...” they charge an annual fee which all property owners are required to pay, and so it had to be enforced by law. Pennsylvania has an enabling law, and the city also has to approve the BID. Residents were asked vote but votes are not based upon one person, one vote; they are based upon the value of property owned. As a result, a few large, really large, property owners dominate the vote, and it was approved. But you mentioned that these are not really privatization? I think BIDs can be thought of as privatizing public services, although they do not want to be thought of that way. Nonetheless when you see their mechanized street sweeping machines cleaning the streets, their employees sweeping the streets, it is difÀcult to think they are not providing public services. And they have cleaned up the downtown; they have made it safer not only by putting uniformed personnel on the streets but by making the city, center city, more attractive for restaurants, retail stores…all of which bring more people to the streets,

payment of assessments. Thus, free riding was common and these organizations were largely ineffective or disbanded entirely. In what ways did Center City improve as a result of BIDs? As indicated above, it has improved Center City enormously: it is clean. It used to be that trash was all over. There was a very high crime rate. The Center City you see today did not exist twenty years ago. Right now, you can go downtown at eleven o’clock at night and the city is booming. BID personnel are on the streets, you’ve seen them in their turquoise or mango-color jackets. Prof. Pack, would there be one piece of advice that you would like to pass on to our student readers? I believe that you want to be as well-trained as possible, regardless of what you intend to do and to think broadly about what you might want to do. iBR