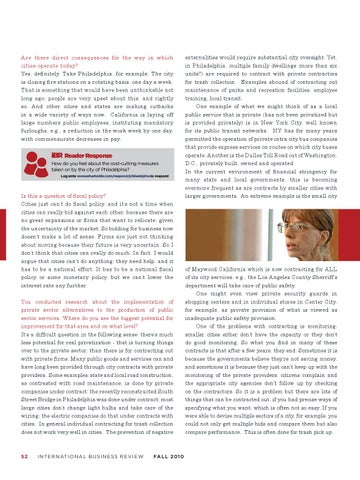 Are there direct consequences for the way in which cities operate today? Yes, deÀ nitely. Take Philadelphia, for example. The city is closing À re stations on a rotating basis, one day a week. That is something that would have been unthinkable not long ago; people are very upset about this, and rightly so. And other cities and states are making cutbacks in a wide variety of ways now. California is laying off large numbers public employees, instituting mandatory furloughs, e.g., a reduction in the work week by one day, with commensurate decreases in pay.

iBR Reader Response How do you feel about the cost-cutting measures taken on by the city of Philadelphia? Log onto www.whartonibr.com/respond/philadelphia to respond

Is this a question of Àscal policy? Cities just can’t do Àscal policy, and it’s not a time when cities can really bid against each other, because there are no great expansions or Àrms that want to relocate, given the uncertainty of the market. So bidding for business now doesn’t make a lot of sense. Firms are just not thinking about moving because their future is very uncertain. So I don’t think that cities can really do much. In fact, I would argue that cities can’t do anything; they need help, and it has to be a national effort. It has to be a national Àscal policy or some monetary policy, but we can’t lower the interest rate any further. You conducted research about the implementation of private sector alternatives to the production of public sector services. Where do you see the biggest potential for improvement for that area and on what level? It’s a difÀcult question in the following sense: there’s much less potential for real privatization - that is turning things over to the private sector, than there is for contracting out with private Àrms. Many public goods and services can and have long been provided through city contracts with private providers. Some examples: state and local road construction, as contrasted with road maintenance, is done by private companies under contract; the recently reconstructed South Street Bridge in Philadelphia was done under contract; most large cities don’t change light bulbs and take care of the wiring; the electric companies do that under contracts with cities. In general individual contracting for trash collection does not work very well in cities. The prevention of negative

externalities would require substantial city oversight. Yet, in Philadelphia, multiple family dwellings (more than six units?) are required to contract with private contractors for trash collection. Examples abound of contracting out maintenance of parks and recreation facilities, employee training, local transit. One example of what we might think of as a local public service that is private (has not been privatized but is provided privately) is in New York City, well known for its public transit networks. NY has for many years permitted the operation of private intra city bus companies that provide express services on routes on which city buses operate. Another is the Dulles Toll Road out of Washington, D.C., privately built, owned and operated. In the current environment of Ànancial stringency for many state and local governments, this is becoming evermore frequent as are contracts by smaller cities with larger governments. An extreme example is the small city

of Maywood California which is now contracting for ALL of its city services, e.g., the Los Angeles County Sherriff’s department will take care of public safety. One might even view private security guards in shopping centers and in individual stores in Center City, for example, as private provision of what is viewed as inadequate public safety provision. One of the problems with contracting is monitoring: smaller cities either don’t have the capacity or they don’t do good monitoring. So what you Ànd in many of these contracts is that after a few years, they end. Sometimes it is because the governments believe they’re not saving money, and sometimes it is because they just can’t keep up with the monitoring of the private providers; citizens complain and the appropriate city agencies don’t follow up by checking on the contractors. So it is a problem but there are lots of things that can be contracted out, if you had precise ways of specifying what you want, which is often not so easy. If you were able to devise multiple sectors of a city, for example, you could not only get multiple bids and compare them but also compare performance. This is often done for trash pick up.