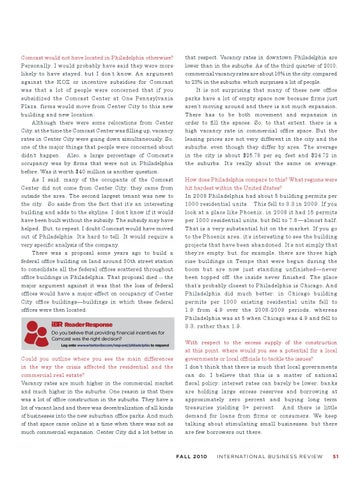 Comcast would not have located in Philadelphia otherwise? Personally, I would probably have said they were more likely to have stayed, but I don’t know. An argument against the KOZ or incentive subsidies for Comcast was that a lot of people were concerned that if you subsidized the Comcast Center at One Pennsylvania Plaza, firms would move from Center City to this new building and new location. Although there were some relocations from Center City, at the time the Comcast Center was Àlling up, vacancy rates in Center City were going down simultaneously. So, one of the major things that people were concerned about didn’t happen. Also, a large percentage of Comcast’s occupancy was by Àrms that were not in Philadelphia before. Was it worth $40 million is another question. As I said, many of the occupants of the Comcast Center did not come from Center City; they came from outside the area. The second largest tenant was new to the city. So aside from the fact that it’s an interesting building and adds to the skyline, I don’t know if it would have been built without the subsidy. The subsidy may have helped. But, to repeat, I doubt Comcast would have moved out of Philadelphia. It’s hard to tell. It would require a very speciÀc analysis of the company. There was a proposal some years ago to build a federal ofÀce building on land around 30th street station to consolidate all the federal ofÀces scattered throughout ofÀce buildings in Philadelphia. That proposal died -- the major argument against it was that the loss of federal ofÀces would have a major effect on occupancy of Center City ofÀce buildings—buildings in which these federal ofÀces were then located.

iBR Reader Response Do you believe that providing ﬁnancial incentives for Comcast was the right decision? Log onto www.whartonibr.com/respond/philadelphia to respond

Could you outline where you see the main differences in the way the crisis affected the residential and the commercial real estate? Vacancy rates are much higher in the commercial market and much higher in the suburbs. One reason is that there was a lot of ofÀce construction in the suburbs. They have a lot of vacant land and there was decentralization of all kinds of businesses into the new suburban ofÀce parks. And much of that space came online at a time when there was not as much commercial expansion. Center City did a lot better in

that respect. Vacancy rates in downtown Philadelphia are lower than in the suburbs. As of the third quarter of 2010, commercial vacancy rates are about 16% in the city, compared to 23% in the suburbs, which surprises a lot of people. It is not surprising that many of these new ofÀce parks have a lot of empty space now because À rms just aren’t moving around and there is not much expansion. There has to be both movement and expansion in order to À ll the spaces. So, to that extent, there is a high vacancy rate in commercial ofÀce space. But the leasing prices are not very different in the city and the suburbs, even though they differ by area. The average in the city is about $25.78 per sq. feet and $24.72 in the suburbs. It’s really about the same on average. How does Philadelphia compare to this? What regions were hit hardest within the United States? In 2008 Philadelphia had about 5 building permits per 1000 residential units. This fell to 3.3 in 2009. If you look at a place like Phoenix, in 2008 it had 15 permits per 1000 residential units, but fell to 7.8—almost half. That is a very substantial hit on the market. If you go to the Phoenix area, it’s interesting to see the building projects that have been abandoned. It’s not simply that they’re empty, but, for example, there are three high rise buildings in Tempe that were begun during the boom but are now just standing unfinished—never been topped off, the inside never finished. The place that’s probably closest to Philadelphia is Chicago. And Philadelphia did much better: in Chicago building permits per 1000 existing residential units fell to 1.9 from 4.9 over the 2008-2009 periods, whereas Philadelphia was at 5 when Chicago was 4.9 and fell to 3.3, rather than 1.9. With respect to the excess supply of the construction at this point, where would you see a potential for a local governments or local ofÀcials to tackle the issues? I don’t think that there is much that local governments can do. I believe that this is a matter of national Àscal policy: interest rates can barely be lower; banks are holding large excess reserves and borrowing at approximately zero percent and buying long term treasuries yielding 3+ percent. And there is little demand for loans from À rms or consumers. We keep talking about stimulating small businesses, but there are few borrowers out there.