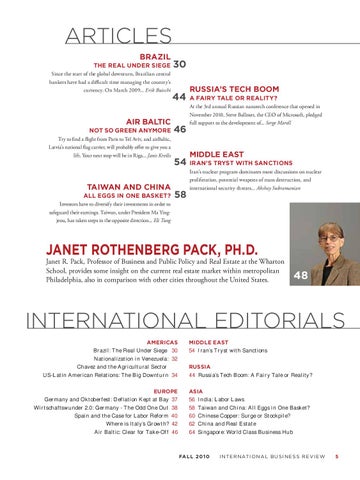 ARTICLES BRAZIL THE REAL UNDER SIEGE Since the start of the global downturn, Brazilian central bankers have had a difficult time managing the country’s currency. On March 2009... Erik Buischi

AIR BALTIC NOT SO GREEN ANYMORE Try to find a flight from Paris to Tel Aviv, and airBaltic, Latvia’s national flag carrier, will probably offer to give you a lift. Your next stop will be in Riga... Janis Kreilis

TAIWAN AND CHINA ALL EGGS IN ONE BASKET?

RUSSIA’S TECH BOOM A FAIRY TALE OR REALITY? At the 3rd annual Russian nanotech conference that opened in November 2010, Steve Ballmer, the CEO of Microsoft, pledged full support to the development of... Serge Morell

Investors have to diversify their investments in order to safeguard their earnings. Taiwan, under President Ma Yingjeou, has taken steps in the opposite direction... Eli Tung

JANET ROTHENBERG PACK, PH.D. Janet R. Pack, Professor of Business and Public Policy and Real Estate at the Wharton School, provides some insight on the current real estate market within metropolitan Philadelphia, also in comparison with other cities throughout the United States.

INTERNATIONAL EDITORIALS AMERICAS Brazil: The Real Under Siege 30 Nationalization in Venezuela: 32 Chavez and the Agricultural Sector 30 US-Latin American Relations: The Big Downturn 34 EUROPE Germany and Oktoberfest: Deflation Kept at Bay Wirtschaftswunder 2.0: Germany - The Odd One Out Spain and the Case for Labor Reform Where is Italy’s Growth? Air Baltic: Clear for Take-Off