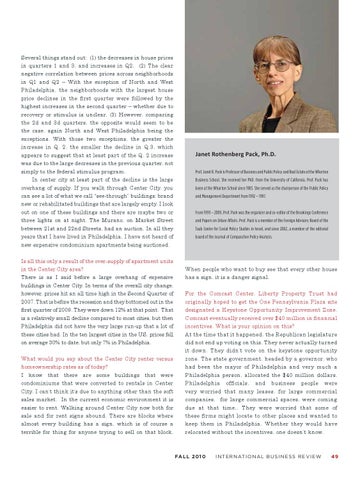 Several things stand out: (1) the decreases in house prices in quarters 1 and 3, and increases in Q2. (2) The clear negative correlation between prices across neighborhoods in Q1 and Q2 – With the exception of North and West Philadelphia, the neighborhoods with the largest house price declines in the Àrst quarter were followed by the highest increases in the second quarter – whether due to recovery or stimulus is unclear. (3) However, comparing the 2d and 3d quarters, the opposite would seem to be the case, again North and West Philadelphia being the exceptions. With those two exceptions, the greater the increase in Q. 2, the smaller the decline in Q.3, which appears to suggest that at least part of the Q. 2 increase was due to the large decreases in the previous quarter, not simply to the federal stimulus program. In center city at least part of the decline is the large overhang of supply. If you walk through Center City, you can see a lot of what we call “see-through” buildings: brand new or rehabilitated buildings that are largely empty. I look out on one of these buildings and there are maybe two or three lights on at night. The Murano, on Market Street between 21st and 22nd Streets, had an auction. In all they years that I have lived in Philadelphia, I have not heard of new expensive condominium apartments being auctioned. Is all this only a result of the over-supply of apartment units in the Center City area? There is as I said before a large overhang of expensive buildings in Center City. In terms of the overall city change, however, prices hit an all time high in the Second Quarter of 2007. That is before the recession and they bottomed out in the Àrst quarter of 2009. They were down 12% at that point. That is a relatively small decline compared to most cities, but then Philadelphia did not have the very large run-up that a lot of these cities had. In the ten largest cities in the US, prices fell on average 30% to date, but only 7% in Philadelphia. What would you say about the Center City renter versus homeownership rates as of today? I know that there are some buildings that were condominiums that were converted to rentals in Center City. I can’t think it’s due to anything other than the soft sales market. In the current economic environment it is easier to rent. Walking around Center City now both for sale and for rent signs abound. There are blocks where almost every building has a sign, which is of course a terrible for thing for anyone trying to sell on that block.

From 1999 – 2009, Prof. Pack was the organizer and co-editor of the Brookings Conference and Papers on Urban Affairs. Prof. Pack is a member of the Foreign Advisory Board of the Taub Center for Social Policy Studies in Israel, and since 2002, a member of the editorial board of the Journal of Comparative Policy Analysis.

When people who want to buy see that every other house has a sign, it is a danger signal. For the Comcast Center, Liberty Property Trust had originally hoped to get the One Pennsylvania Plaza site designated a Keystone Opportunity Improvement Zone. Comcast eventually received over $40 million in Ànancial incentives. What is your opinion on this? At the time that it happened, the Republican legislature did not end up voting on this. They never actually turned it down. They didn’t vote on the keystone opportunity zone. The state government, headed by a governor, who had been the mayor of Philadelphia and very much a Philadelphia person, allocated the $40 million dollars. Philadelphia ofÀcials, and business people were very worried that many leases, for large commercial companies, for large commercial spaces, were coming due at that time,. They were worried that some of these À rms might locate to other places and wanted to keep them in Philadelphia. Whether they would have relocated without the incentives, one doesn’t know.