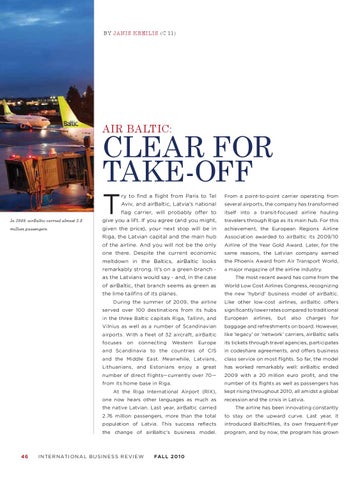 From a point-to-point carrier operating from

several airports, the company has transformed

ﬂag carrier, will probably offer to

itself into a transit-focused airline hauling

give you a lift. If you agree (and you might,

travelers through Riga as its main hub. For this

given the price), your next stop will be in

Riga, the Latvian capital and the main hub

Association awarded to airBaltic its 2009/10

of the airline. And you will not be the only

Airline of the Year Gold Award. Later, for the

one there. Despite the current economic

meltdown in the Baltics, airBaltic looks

a major magazine of the airline industry.

as the Latvians would say - and, in the case

The most recent award has come from the

of airBaltic, that branch seems as green as

the lime tailﬁns of its planes.

During the summer of 2009, the airline

served over 100 destinations from its hubs

in the three Baltic capitals Riga, Tallinn, and

Vilnius as well as a number of Scandinavian

baggage and refreshments on board. However,

airports. With a ﬂ eet of 32 aircraft, airBaltic

its tickets through travel agencies, participates

and Scandinavia to the countries of CIS

in codeshare agreements, and offers business

and the Middle East. Meanwhile, Latvians,

class service on most ﬂights. So far, the model

Lithuanians, and Estonians enjoy a great

number of direct ﬂ ights—currently over 70—

from its home base in Riga.

number of its ﬂights as well as passengers has

At the Riga International Airport (RIX), one now hears other languages as much as

kept rising throughout 2010, all amidst a global recession and the crisis in Latvia.

The airline has been innovating constantly

2.76 million passengers, more than the total

to stay on the upward curve. Last year, it

population of Latvia. This success reﬂects

the change of airBaltic’s business model.

program, and by now, the program has grown