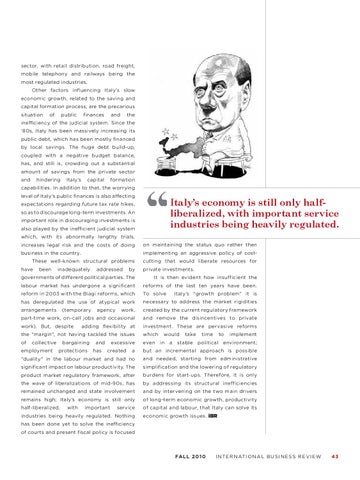 sector, with retail distribution, road freight, mobile telephony and railways being the most regulated industries. Other factors inﬂ uencing Italy’s slow economic growth, related to the saving and capital formation process, are the precarious situation

ineffi ciency of the judicial system. Since the ‘80s, Italy has been massively increasing its public debt, which has been mostly ﬁ nanced by local savings. The huge debt build-up, coupled with a negative budget balance, has, and still is, crowding out a substantial amount of savings from the private sector and

capabilities. In addition to that, the worrying level of Italy’s public ﬁ nances is also aff ecting

Italy’s economy is still only halfliberalized, with important service industries being heavily regulated.

expectations regarding future tax rate hikes, so as to discourage long-term investments. An important role in discouraging investments is also played by the ineffi cient judicial system which, with its abnormally lengthy trials, increases legal risk and the costs of doing

on maintaining the status quo rather then

business in the country.

These well-known structural problems have

cutting that would liberate resources for private investments.

It is then evident how insufficient the

reforms of the last ten years have been.

reform in 2003 with the Biagi reforms, which

has deregulated the use of atypical work

necessary to address the market rigidities

Italy’s “growth problem” it is

created by the current regulatory framework

and remove the disincentives to private

investment. These are pervasive reforms

the “margin”, not having tackled the issues

but an incremental approach is possible

“duality” in the labour market and had no

and needed, starting from administrative

simplification and the lowering of regulatory

burdens for start-ups. Therefore, it is only

the wave of liberalizations of mid-90s, has

by addressing its structural inefficiencies

and by intervening on the two main drivers

of capital and labour, that Italy can solve its

industries being heavily regulated. Nothing