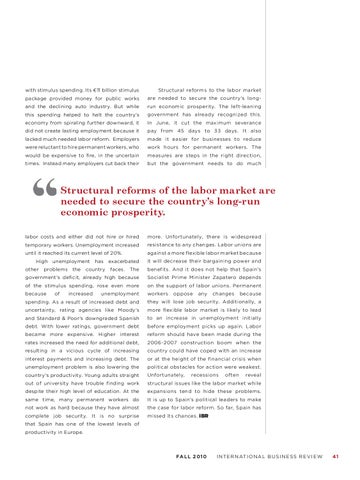 with stimulus spending. Its €11 billion stimulus

Structural reforms to the labor market

are needed to secure the country’s long-

and the declining auto industry. But while

this spending helped to halt the country’s

government has already recognized this.

economy from spiraling further downward, it

In June, it cut the maximum severance

did not create lasting employment because it

made it easier for businesses to reduce

were reluctant to hire permanent workers, who

work hours for permanent workers. The

would be expensive to ﬁ re, in the uncertain

measures are steps in the right direction,

times. Instead many employers cut back their

but the government needs to do much

Structural reforms of the labor market are needed to secure the country’s long-run economic prosperity. labor costs and either did not hire or hired

more. Unfortunately, there is widespread

resistance to any changes. Labor unions are

until it reached its current level of 20%.

against a more flexible labor market because

it will decrease their bargaining power and

benefits. And it does not help that Spain’s

of the stimulus spending, rose even more

on the support of labor unions. Permanent

spending. As a result of increased debt and

they will lose job security. Additionally, a

to an increase in unemployment initially

before employment picks up again. Labor

reform should have been made during the

resulting in a vicious cycle of increasing

country could have coped with an increase

interest payments and increasing debt. The

or at the height of the financial crisis when

unemployment problem is also lowering the

political obstacles for action were weakest.

out of university have trouble ﬁ nding work

despite their high level of education. At the

expansions tend to hide these problems.

same time, many permanent workers do

It is up to Spain’s political leaders to make

not work as hard because they have almost

the case for labor reform. So far, Spain has

complete job security. It is no surprise

that Spain has one of the lowest levels of productivity in Europe.