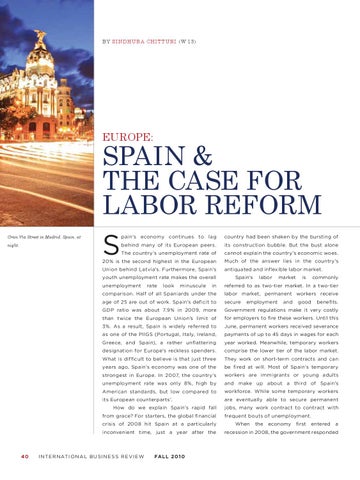 SPAIN & THE CASE FOR LABOR REFORM Gran Via Street in Madrid, Spain, at night.

country had been shaken by the bursting of

behind many of its European peers.

its construction bubble. But the bust alone

The country’s unemployment rate of

20% is the second highest in the European

Much of the answer lies in the country’s

comparison. Half of all Spaniards under the

age of 25 are out of work. Spain’s deficit to

than twice the European Union’s limit of

for employers to ﬁ re these workers. Until this

3%. As a result, Spain is widely referred to

as one of the PIIGS (Portugal, Italy, Ireland,

payments of up to 45 days in wages for each

Greece, and Spain), a rather unflattering

comprise the lower tier of the labor market.

What is difficult to believe is that just three

They work on short-term contracts and can

years ago, Spain’s economy was one of the

be fired at will. Most of Spain’s temporary

workers are immigrants or young adults

unemployment rate was only 8%, high by

and make up about a third of Spain’s

American standards, but low compared to

workforce. While some temporary workers

are eventually able to secure permanent

from grace? For starters, the global ﬁ nancial crisis of 2008 hit Spain at a particularly inconvenient time, just a year after the

referred to as two-tier market. In a two-tier

How do we explain Spain’s rapid fall

jobs, many work contract to contract with frequent bouts of unemployment. When

recession in 2008, the government responded