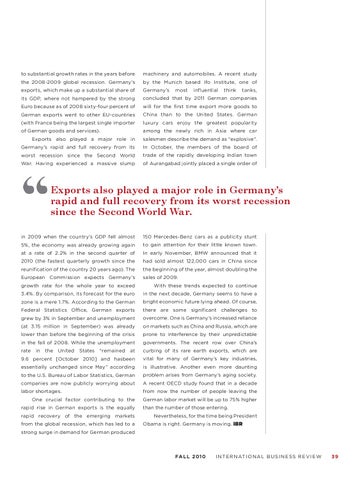 to substantial growth rates in the years before

machinery and automobiles. A recent study

by the Munich based Ifo Institute, one of

its GDP, where not hampered by the strong

concluded that by 2011 German companies

Euro because as of 2008 sixty-four percent of

will for the ﬁ rst time export more goods to

German exports went to other EU-countries

China than to the United States. German

(with France being the largest single importer

of German goods and services).

among the newly rich in Asia where car

salesmen describe the demand as “explosive”.

Germany’s rapid and full recovery from its

In October, the members of the board of

worst recession since the Second World

War. Having experienced a massive slump

of Aurangabad jointly placed a single order of

Exports also played a major role in Germany’s rapid and full recovery from its worst recession since the Second World War. in 2009 when the country’s GDP fell almost

150 Mercedes-Benz cars as a publicity stunt

5%, the economy was already growing again

to gain attention for their little known town.

In early November, BMW announced that it

2010 (the fastest quarterly growth since the

reuniﬁ cation of the country 20 years ago). The

the beginning of the year, almost doubling the

growth rate for the whole year to exceed

With these trends expected to continue

3.4%. By comparison, its forecast for the euro

in the next decade, Germany seems to have a

zone is a mere 1.7%. According to the German

there are some signiﬁcant challenges to

grew by 3% in September and unemployment

overcome. One is Germany’s increased reliance

(at 3.15 million in September) was already

on markets such as China and Russia, which are

lower than before the beginning of the crisis

prone to interference by their unpredictable

in the fall of 2008. While the unemployment

governments. The recent row over China’s

curbing of its rare earth exports, which are

vital for many of Germany’s key industries,

essentially unchanged since May” according

is illustrative. Another even more daunting

to the U.S. Bureau of Labor Statistics, German

companies are now publicly worrying about

A recent OECD study found that in a decade

from now the number of people leaving the

One crucial factor contributing to the rapid rise in German exports is the equally rapid recovery of the emerging markets from the global recession, which has led to a

German labor market will be up to 75% higher than the number of those entering. Nevertheless, for the time being President Obama is right. Germany is moving. iBR