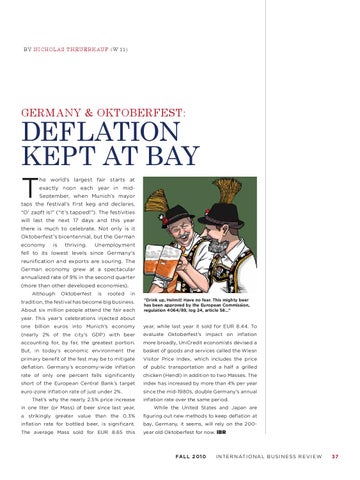 he world’s largest fair starts at exactly noon each year in midSeptember, when Munich’s mayor

taps the festival’s ﬁrst keg and declares, “O’ zapft is!” (“it’s tapped!”). The festivities will last the next 17 days and this year there is much to celebrate. Not only is it Oktoberfest’s bicentennial, but the German economy

fell to its lowest levels since Germany’s reuniﬁcation and exports are souring. The German economy grew at a spectacular annualized rate of 9% in the second quarter (more than other developed economies). Although

tradition, the festival has become big business. About six million people attend the fair each

year. This year’s celebrations injected about one billion euros into Munich’s economy

accounting for, by far, the greatest portion.

But, in today’s economic environment the

basket of goods and services called the Wiesn

primary beneﬁt of the fest may be to mitigate

of public transportation and a half a grilled

rate of only one percent falls signiﬁ cantly

chicken (Hendl) in addition to two Masses. The

index has increased by more than 4% per year

since the mid-1980s, double Germany’s annual

That’s why the nearly 2.5% price increase

inﬂation rate over the same period.

in one liter (or Mass) of beer since last year,

While the United States and Japan are

a strikingly greater value than the 0.3%

The average Mass sold for EUR 8.65 this