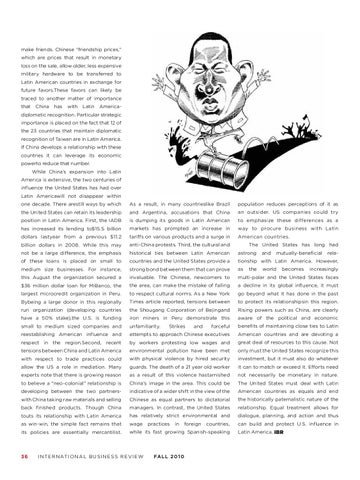 make friends. Chinese “friendship prices,” which are prices that result in monetary loss on the sale, allow older, less expensive military hardware to be transferred to Latin American countries in exchange for future favors.These favors can likely be traced to another matter of importance that

diplomatic recognition. Particular strategic importance is placed on the fact that 12 of the 23 countries that maintain diplomatic recognition of Taiwan are in Latin America. If China develops a relationship with these countries it can leverage its economic powerto reduce that number. While China’s expansion into Latin America is extensive, the two centuries of inﬂuence the United States has had over Latin Americawill not disappear within one decade. There arestill ways by which

As a result, in many countrieslike Brazil

population reduces perceptions of it as

the United States can retain its leadership

and Argentina, accusations that China

an outsider. US companies could try

is dumping its goods in Latin American

to emphasize these differences as a

has increased its lending to$15.5 billion

markets has prompted an increase in

way to procure business with Latin

dollars lastyear from a previous $11.2

tariffs on various products and a surge in

billion dollars in 2008. While this may

anti-China protests. Third, the cultural and

not be a large difference, the emphasis

of these loans is placed on small to

countries and the United States provide a

tionship with Latin America. However,

strong bond between them that can prove

this August the organization secured a

invaluable. The Chinese, newcomers to

multi-polar and the United States faces

$36 million dollar loan for MiBanco, the

the area, can make the mistake of failing

a decline in its global inﬂuence, it must

to respect cultural norms. As a New York

go beyond what it has done in the past

Bybeing a large donor in this regionally

to protect its relationshipsin this region.

the Shougang Corporation of Bejingand

Rising powers such as China, are clearly

iron miners in Peru demonstrate this

aware of the political and economic

small to medium sized companies and

American countries and are devoting a

respect in the region.Second, recent

by workers protesting low wages and

great deal of resources to this cause. Not

tensions between China and Latin America

environmental pollution have been met

only must the United States recognize this

with respect to trade practices could

with physical violence by hired security

investment, but it must also do whatever

allow the US a role in mediation. Many

guards. The death of a 21 year old worker

it can to match or exceed it. Efforts need

experts note that there is growing reason

as a result of this violence hastarnished

not necessarily be monetary in nature.

to believe a “neo-colonial” relationship is

China’s image in the area. This could be

The United States must deal with Latin

developing between the two partners-

indicative of a wider shift in the view of the

American countries as equals and end

Chinese as equal partners to dictatorial

the historically paternalistic nature of the

back ﬁnished products. Though China

managers. In contrast, the United States

touts its relationship with Latin America

has relatively strict environmental and

dialogue, planning, and action and thus

as win-win, the simple fact remains that

can build and protect U.S. inﬂuence in

its policies are essentially mercantilist.

while its fast growing Spanish-speaking

The United States has long had