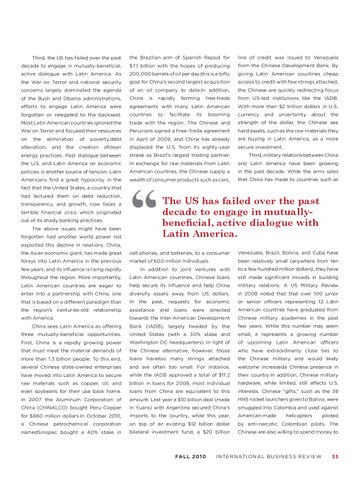 Third, the US has failed over the past

the Brazilian arm of Spanish Repsol for

line of credit was issued to Venezuela

decade to engage in mutually-beneﬁcial,

$7.1 billion with the hopes of producing

from the Chinese Development Bank. By

active dialogue with Latin America. As

the War on Terror and national security

of an oil company to date.In addition,

the Chinese are quickly redirecting focus

of the Bush and Obama administrations,

efforts to engage Latin America were

agreements with many Latin American

With more than $2 trillion dollars in U.S.

forgotten or relegated to the backseat.

Most Latin American countries ignored the

trade with the region. The Chinese and

strength of the dollar, the Chinese see

War on Terror and focused their resources

hard assets, such as the raw materials they

are buying in Latin America, as a more

displaced the U.S. from its eighty-year

energy practices. Past dialogue between

the U.S. and Latin America on economic

In exchange for raw materials from Latin

and Latin America have been growing

policies is another source of tension. Latin

American countries, the Chinese supply a

in the past decade. While the arms sales

Americans ﬁnd a great hypocrisy in the

wealth of consumer products such as cars,

that China has made to countries such as

fact that the United States, a country that

The US has failed over the past decade to engage in mutuallybeneÀcial, active dialogue with Latin America.

had lectured them on debt reduction, transparency, and growth, now faces a terrible ﬁnancial crisis which originated out of its shady banking practices. The above issues might have been forgotten had another world power not exploited this decline in relations. China, the Asian economic giant, has made great

cell phones, and batteries, to a consumer

Venezuela, Brazil, Bolivia, and Cuba have

forays into Latin America in the previous

been relatively small (anywhere from ten to a few hundred million dollars), they have

few years, and its inﬂuence is rising rapidly

In addition to joint ventures with

throughout the region. More importantly,

still made signiﬁcant inroads in building

Latin American countries are eager to

military relations. A US Military Review

enter into a partnership with China, one

diversify assets away from US dollars.

that is based on a different paradigm than

American countries have graduated from

towards the Inter-American Development

Chinese military academies in the past

Bank (IADB), largely headed by the

few years. While this number may seem

United States (with a 30% stake and

small, it represents a growing number

Washington DC headquarters). In light of

that must meet the material demands of

the Chinese alternative, however, those

who have extraordinarily close ties to

more than 1.3 billion people. To this end,

the Chinese military and would likely

and are often too small. For instance,

have moved into Latin America to secure

while the IADB approved a total of $11.2

raw materials such as copper, oil, and

billion in loans for 2008, most individual

even soybeans for their use back home.

loans from China are equivalent to this

interests. Chinese “gifts,” such as the 38

In 2007 the Aluminum Corporation of

HN5 rocket launchers given to Bolivia, were

in Yuans) with Argentina secured China’s

smuggled into Colombia and used against

imports to the country, while this year,

on top of an existing $12 billion dollar

by anti-narcotic Colombian pilots. The

namedSinopec bought a 40% stake in

Chinese are also willing to spend money to