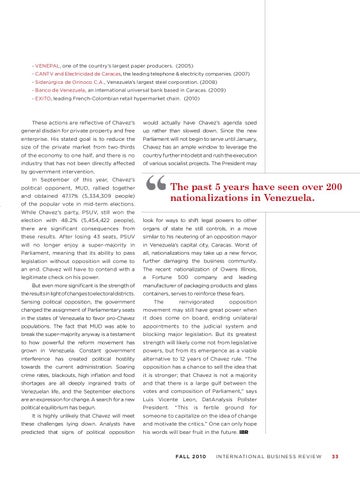 These actions are reﬂective of Chavez’s

would actually have Chavez’s agenda sped

up rather than slowed down. Since the new

enterprise. His stated goal is to reduce the

Parliament will not begin to serve until January,

size of the private market from two-thirds

Chavez has an ample window to leverage the

of the economy to one half, and there is no

country further into debt and rush the execution

industry that has not been directly affected

of various socialist projects. The President may

by government intervention. In September of this year, Chavez’s

The past 5 years have seen over 200 nationalizations in Venezuela.

look for ways to shift legal powers to other

there are signiﬁcant consequences from

organs of state he still controls, in a move

these results. After losing 43 seats, PSUV

similar to his neutering of an opposition mayor

will no longer enjoy a super-majority in

Parliament, meaning that its ability to pass

all, nationalizations may take up a new fervor,

legislation without opposition will come to

an end. Chavez will have to contend with a

The recent nationalization of Owens Illinois,

legitimate check on his power.

But even more signiﬁcant is the strength of the results in light of changes to electoral districts. Sensing political opposition, the government

manufacturer of packaging products and glass containers, serves to reinforce these fears. The

changed the assignment of Parliamentary seats

movement may still have great power when

in the states of Venezuela to favor pro-Chavez

it does come on board, ending unilateral

populations. The fact that MUD was able to

appointments to the judicial system and

break the super-majority anyway is a testament

blocking major legislation. But its greatest

to how powerful the reform movement has

strength will likely come not from legislative

powers, but from its emergence as a viable

alternative to 12 years of Chavez rule. “The

towards the current administration. Soaring

opposition has a chance to sell the idea that

it is stronger; that Chavez is not a majority

shortages are all deeply ingrained traits of

and that there is a large gulf between the

Venezuelan life, and the September elections

votes and composition of Parliament,” says

are an expression for change. A search for a new

It is highly unlikely that Chavez will meet

someone to capitalize on the idea of change

these challenges lying down. Analysts have

and motivate the critics.” One can only hope

predicted that signs of political opposition

his words will bear fruit in the future. iBR