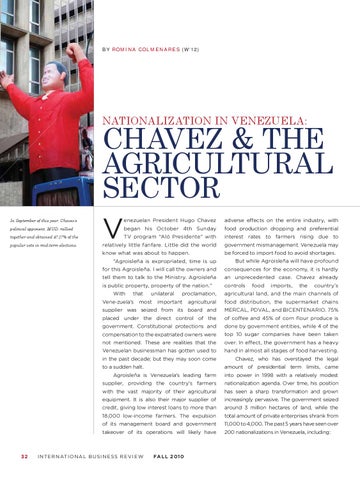 In September of this year, Chavez’s political opponent, MUD, rallied together and obtained 47.17% of the popular vote in mid-term elections.

adverse effects on the entire industry, with

interest rates to farmers rising due to

know what was about to happen.

be forced to import food to avoid shortages.

“Agroisleña is expropriated, time is up

But while Agroisleña will have profound

for this Agroisleña. I will call the owners and

consequences for the economy, it is hardly

tell them to talk to the Ministry. Agroisleña

is public property, property of the nation.”

placed under the direct control of the

of coffee and 45% of corn ﬂour produce is

done by government entities, while 4 of the

compensation to the expatriated owners were

top 10 sugar companies have been taken

not mentioned. These are realities that the

over. In effect, the government has a heavy

Venezuelan businessman has gotten used to

hand in almost all stages of food harvesting.

in the past decade; but they may soon come

Chavez, who has overstayed the legal amount of presidential term limits, came

to a sudden halt.

supplier was seized from its board and

agricultural land, and the main channels of

into power in 1998 with a relatively modest

nationalization agenda. Over time, his position

with the vast majority of their agricultural

has seen a sharp transformation and grown

equipment. It is also their major supplier of

around 3 million hectares of land, while the

of its management board and government

takeover of its operations will likely have

200 nationalizations in Venezuela, including: