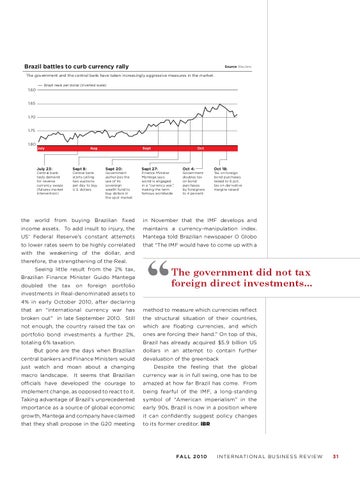 The government and the central bank have taken increasingly aggressive measures in the market. Brazil reals per dollar (inverted scale)

Government doubles tax on bond purchases by foreigners to 4 percent

in November that the IMF develops and

income assets. To add insult to injury, the

to lower rates seem to be highly correlated

that “The IMF would have to come up with a

with the weakening of the dollar, and therefore, the strengthening of the Real. Seeing little result from the 2% tax, Brazilian Finance Minister Guido Mantega doubled

The government did not tax foreign direct investments...

investments in Real-denominated assets to 4% in early October 2010, after declaring that an “international currency war has

broken out” in late September 2010. Still

the structural situation of their countries,

not enough, the country raised the tax on

which are ﬂoating currencies, and which

ones are forcing their hand.” On top of this,

Brazil has already acquired $5.9 billion US

It seems that Brazilian

currency war is in full swing, one has to be

officials have developed the courage to

amazed at how far Brazil has come. From

implement change, as opposed to react to it.

being fearful of the IMF, a long-standing

symbol of “American imperialism” in the

importance as a source of global economic

early 90s, Brazil is now in a position where

growth, Mantega and company have claimed

that they shall propose in the G20 meeting

to its former creditor. iBR