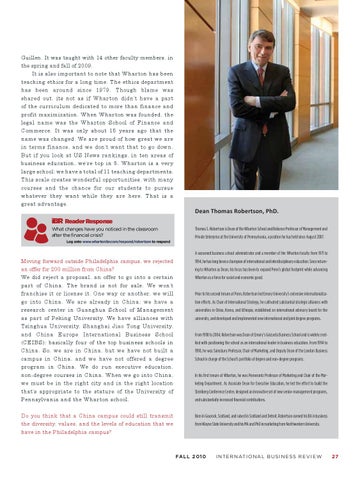 Guillen. It was taught with 14 other faculty members, in the spring and fall of 2009. It is also important to note that Wharton has been teaching ethics for a long time. The ethics department has been around since 1979. Though blame was shared out, its not as if Wharton didn’t have a part of the curriculum dedicated to more than finance and profit maximization. When Wharton was founded, the legal name was the Wharton School of Finance and Commerce. It was only about 15 years ago that the name was changed. We are proud of how great we are in terms finance, and we don’t want that to go down. But if you look at US News rankings, in ten areas of business education, we’re top in 5. Wharton is a very large school; we have a total of 11 teaching departments. This scale creates wonderful opportunities, with many courses and the chance for our students to pursue whatever they want while they are here. That is a great advantage.

iBR Reader Response What changes have you noticed in the classroom after the ﬁnancial crisis?

Thomas S. Robertson is Dean of the Wharton School and Reliance Professor of Management and Private Enterprise at the University of Pennsylvania, a position he has held since August 2007.

Moving forward outside Philadelphia campus, we rejected an offer for 200 million from China? We did reject a proposal, an offer to go into a certain part of China. The brand is not for sale. We won’t franchise it or license it. One way or another, we will go into China. We are already in China; we have a research center in Guanghua School of Management as part of Peking University. We have alliances with Tsinghua University, Shanghai Jiao Tong University, and China Europe International Business School (CEIBS); basically four of the top business schools in China. So, we are in China, but we have not built a campus in China, and we have not offered a degree program in China. We do run executive education, non-degree courses in China. When we go into China, we must be in the right city and in the right location that’s appropriate to the stature of the University of Pennsylvania and the Wharton school. Do you think that a China campus could still transmit the diversity, values, and the levels of education that we have in the Philadelphia campus?

1994, he has long been a champion of international and interdisciplinary education. Since returning to Wharton as Dean, his focus has been to expand Penn’s global footprint while advancing Wharton as a force for social and economic good.

Prior to his second tenure at Penn, Robertson led Emory University’s extensive internationalization efforts. As Chair of International Strategy, he cultivated substantial strategic alliances with universities in China, Korea, and Ethiopia, established an international advisory board for the university, and developed and implemented new international and joint degree programs.

From 1998 to 2004, Robertson was Dean of Emory’s Goizueta Business School and is widely credited with positioning the school as an international leader in business education. From 1994 to 1998, he was Sainsbury Professor, Chair of Marketing, and Deputy Dean of the London Business School in charge of the School’s portfolio of degree and non-degree programs.

In his first tenure at Wharton, he was Pomerantz Professor of Marketing and Chair of the Marketing Department. As Associate Dean for Executive Education, he led the effort to build the Steinberg Conference Center, designed an innovative set of new senior-management programs, and substantially increased financial contributions.

Born in Gourock, Scotland, and raised in Scotland and Detroit, Robertson earned his BA in business from Wayne State University and his MA and PhD in marketing from Northwestern University.